By Jen Reynolds for EDRblog.org.

A River Between Us is a new documentary by former Oregon Senator Jason Atkinson and filmmaker Jeff Martin. (Disclosure: the University of Oregon School of Law ADR Center made a small contribution in support of post-production of the film.) The documentary provides much useful background on the Klamath restoration and, as much as possible given the multiple parties and diverse interests at stake, creates a coherent narrative of the community’s efforts toward resolution. My colleague from Oregon State, water expert Todd Jarvis, has posted an insightful review that examines some of the substantive and historical aspects of the film.

From my perspective, as someone who studies dispute resolution, the movie makes three important claims that are not entirely aligned with one another and accordingly may provide insight into why these kinds of conflict are so intractable.

First, the film makes a strong argument in favor of cooperation between local stakeholders. The central story of the film is how people from different sides of an issue can come together and, in spite of competing interests and identities, figure out solutions to problems. Such optimism about human resilience and community is essential to working through intractable complex disputes, and the filmmakers are intent upon instilling that optimism in the viewer. Indeed, many of the interviews feature individuals from various sides of the dispute recognizing not only the legitimacy of other claims around water rights and allocations, but also the humanity and goodness of other disputants. I wish the movie would have gone into more detail about the actual process underlying these discussions and facilitating these insights, but even without more technical detail, it is inspiring to hear from so many stakeholders who apparently believe in the benefits of cooperative dialogue.

Second, and perhaps in tension with this cooperative frame, the movie recognizes that native/aboriginal entitlements have been historically devalued and that the Klamath is, in many respects, a human rights conflict. One of the most stirring parts of the film is when Yurok tribe member and attorney Amy Cordalis compares the fish kill of 2002 (in which tens of thousands of salmon perished due to low water flow after farmers diverted water from the river during a drought) to the buffalo kill of the 19th century (in which the U.S. military sought to suppress the Sioux by killing off their major food supply). Cordalis characterizes these events as “ecocide,” defined as the “ecological genocide” of her tribe; other interviewees from local tribes describe similar painful experiences of personal loss and tribal devastation. To the extent that the Klamath is a human rights conflict, and this is true of all human rights conflicts, cooperative forward-looking approaches championed by Atkinson and Martin may ultimately fall short of the demands of justice. The filmmakers do not address this tension.

Finally, the filmmakers take a bifurcated position on blame. On the one hand, they argue that we must not blame anyone for the Klamath situation. Early in the film, Atkinson states in voiceover that we should not “point[ ] fingers at our great-grandparents” (white settlers in the mid-1800s) for the damage they did to the Klamath river because they did not know how destructive their actions were and they were “focused on building a country.” In other words, they were ignorant and/or noble, not self serving or short sighted. This inclusive rhetoric continues throughout the film, at least as it pertains to locals past and present. Near the end of the film, in pushing for cooperative solutions, Atkinson asks, “Can cowboys and Indians both be the hero?” By refusing to blame anyone and by ascribing positive motives and identities for all involved, the filmmakers underscore their advocacy for strong relationships and cooperation between interested parties in the Basin.

But on the other hand, the filmmakers have no trouble roundly blaming the federal government for its failure to approve the settlements. No nuanced analysis of reasonable motives or divergent perspectives here. Instead, Atkinson excoriates the federal government as “partisan people bent on control” who treat the issue as a “political football” tossed about while his people “suffer.” This animus is in stark contrast with the benefit of the doubt given to local peoples whose actions were harmful. Perhaps the filmmakers are making a strategic rhetorical choice in delivering their critique in this wholesale fashion. Maybe Congress only listens to complaints framed as categorically as possible. But the shift in tone seems to push for local governance only, and prompts the question whether local cooperation is sufficient or if broader dialogue that takes into account even more perspectives is necessary in complex environmental conflicts.

A River Between Us is worth seeing for anyone with an interest in learning more about what’s going on in the Klamath, about environmental disputes generally, or about the challenges of public multilateral dispute resolution. More information available here, on the documentary’s website. 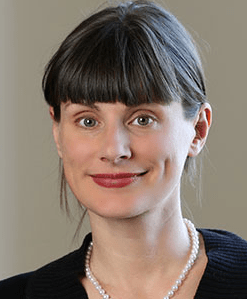 Before moving to Oregon, I had never heard of the Klamath River and knew nothing about the local longstanding water conflicts. I study negotiation, dispute processing, civil procedure, and conflicts of law — not environmental law. Once I got here, however, it was impossible not to recognize the overlap between dispute processing (alternative and traditional) and modern environmental conflicts. Over the past six years, I have learned much more about the Klamath, though I still feel like a beginner when it comes to understanding what has been and is going on there.

Jen Reynolds is an Associate Professor at the University of Oregon School of Law. She also serves as the Faculty Director of Oregon’s ADR Center, which works closely with the law school’s Environmental and Natural Resources Center on environmental conflict resolution, activism, and system design.