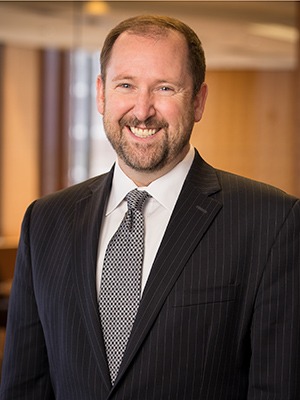 Paul C. Burke is Exhibit A in the case that taking a chance on one opportunity often leads to another. The 1997 alumnus is now general counsel, shareholder, and director at Ray Quinney & Nebeker, where he complements his labor and employment litigation practice with an impressive pro bono docket. His combination of an idealistic spirit and a pragmatic legal mind have led him in directions he says he couldn’t have planned back when he was in law school.

For his latest public-interest challenge, Burke draws on a life-long passion for soccer and deep sense of justice to take on homophobic chants at soccer stadiums. As a diehard soccer enthusiast, Burke has attended U.S.-Mexico matches since 1997. Over the last decade the soccer rivalry between the United States and Mexico—called El Classico—has been often marred by Mexico fans chanting a homophobic slur during goal-kicks. During a 2015 match at the Rose Bowl Stadium, he says, “the chant was allowed to thunder through the stadium.”

When some members of Burke’s group objected to the chant, surrounding spectators began showering them with liquids and throwing things at them. This experience led him into a mission to make sure that no future fans of international soccer would have to hear this chant again. And with Burke’s passion, principles, and legal experience, he is well situated to take on this challenge.

In 2021, Burke and three other fans sued the management of Chicago’s Soldier Field along with the Chicago Park District. The Illinois Department of Human Rights investigated and found substantial evidence that homophobic chants during the championship match of the 2019 CONCACAF Gold Cup—along with stadium officials’ failure to stop the chants—had deprived them of equal enjoyment of the match in violation of the Illinois Human Rights Act.

The matter, in which the plaintiffs are represented by pro bono counsel at the Chicago office of Winston & Strawn, is currently in mediation. Burke says that in May 2022, the U.S. Soccer Board of Directors adopted an enforcement policy to address the chants and the Illinois Attorney General’s Office launched an investigation related to chants at Soldier Field.

This isn’t the first time law and soccer have intersected in Burke’s life. He paid for law school in part by coaching while he was a law student. He also has held leadership positions in the soccer world, including a term as president of the Utah Youth Soccer Association and a twelve-year stint on the Rules Committee of the United States Soccer Federation.

Burke notes there are some commonalities between soccer and law: In soccer, there are 11 people on the field at any given time and 18 players total on the roster. All of the team is necessary to achieve the team’s goals. “The practice of law is not dissimilar,” Burke remarks. In order to serve clients, lawyers rely on their entire team of lawyers and other legal professionals.

Pro bono opportunities on a range of issues

Burke’s pro bono work reaches well beyond the soccer pitch. He has represented religious minorities, Dreamers, a Black Lives Matter activist, and LGBTQ youth. While these matters might seem to vary, Burke notes that they all touch on his sense of justice and desire to be part of something larger than himself.

Burke encourages current students to choose the best colleagues they can find and work toward the law practice they dream of. He notes, “There are lots of ways to make a difference and the key is to be open to those opportunities.”

But don’t be fooled by the idealistic spirit. Burke says he is a very pragmatic attorney. “We do have mortgages to pay and families to support,” he notes. He deeply believes in the causes he supports, but he also knows corporate clients can be attracted to firms that do good.

Burke praises his own firm for supporting the pro bono efforts of him and other attorneys. He also says his pro bono work has led to new opportunities in pro bono and paid legal work. In the end, for whatever type of case, Burke commits the same passion to achieving all of his clients’ objectives. “I care about all of my clients,” he says.