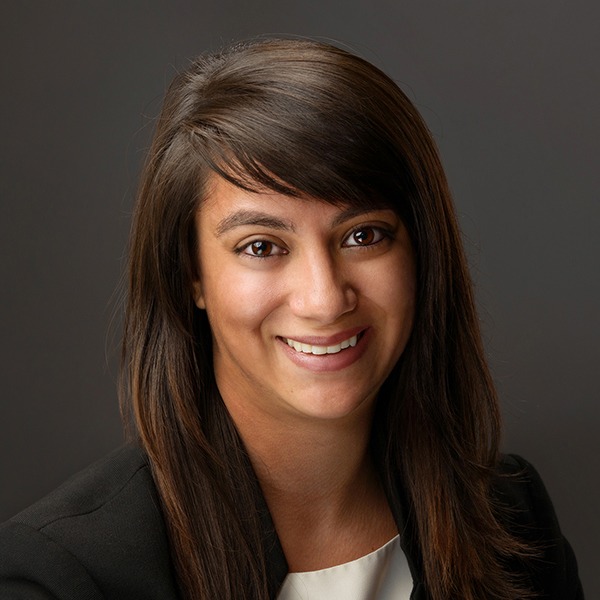 Mel Moeinvaziri knew by the time she was 5 she would grow up to be a lawyer — but only because her father said a girl this good at arguing was definitely destined for the legal profession. It wasn’t until a pivotal year at Oxford University as a grad student in Refugee and Forced Migration Studies that she knew for sure why she wanted a career in law.

Today, Moeinvaziri is a staff attorney at the Michigan Immigrant Rights Center. On a recent phone call from her home in Detroit, with her dog Diego snoring audibly in the background, she talked about her time at the S.J. Quinney School of Law, the path her life has taken, and how as a long-time rock climber she’s trying to keep an open mind about how flat her new city is.

She grew up in suburban Utah, but her perspective from the start was global. Her mother was from Portugal, her stepmother from the Philippines, and her father had left Iran during the 1979 Islamic revolution, “not a de jure but a de facto refugee,” says Moeinvaziri. In high school, her world expanded again when she volunteered with a youth-run community garden and, loaded down with tomatoes and zucchinis, found herself invited into refugee apartments in Salt Lake City.

During her undergraduate days at the University of Utah, where she majored in both political science and international studies. She spent a summer in India, where she tutored elementary school children, and she also held a job as a suicide prevention specialist with NAMI Utah. And then there was the year at Oxford, where she worked with famed legal anthropologist Barbara Harrell-Bond. What the displaced people of the world need most, her mentor told her, was to have their legal rights secured.

Law school was the next logical step. But Moeinvaziri is candid about how her first semester at the S.J. Quinney College of Law was, well, “so dry,” centered on contracts and property law. “I couldn’t imagine representing anyone with those needs,” she says. “I was on the verge of moving to the College of Social Work.”

And then she discovered the law school’s Pro Bono Initiative (PBI), with its community clinics that provide brief legal help to immigrants and others who can’t afford a lawyer. Under the mentorship of PBI director JoLynn Spruance, it was the first time, she says, that she could see the abstraction of the law having real-world impact. During law school, she interned at both the U.S. District Court and the Salt Lake City Immigration Court, won the CALI award for legal writing, and clerked at Perretta Law. After graduating in 2017, Moeinvaziri joined the firm, focusing on deportation and asylum cases.

The two weeks in 2021 before the United States abruptly left Afghanistan, she says, “were probably the hardest of my legal career,” as she worked to get her clients’ families out of the country. It wasn’t a stretch to imagine that “if things had gone differently, it could have been my family.”

The U.N. Refugee Agency estimated earlier this year that there are nearly 71 million forcibly displaced people in the world, including 26 million refugees. Now add to that list the over 5 million people who have fled the war in Ukraine.

While Ukrainian refugees have, deservedly, captivated the attention of the United States, Moeinvaziri wishes more Americans could see the bigger world picture and understand “how daunting and horrid the U.S. immigration system is.” Too many immigrants, she says, end up in detention centers that she describes as “far worse than any criminal prison.”

To people, including one of her own family members, who argue that America needs to crack down harder on undocumented immigrants and asylum-seekers — that America is already “full” — Moeinvaziri shoots back that “America is not a hotel.”