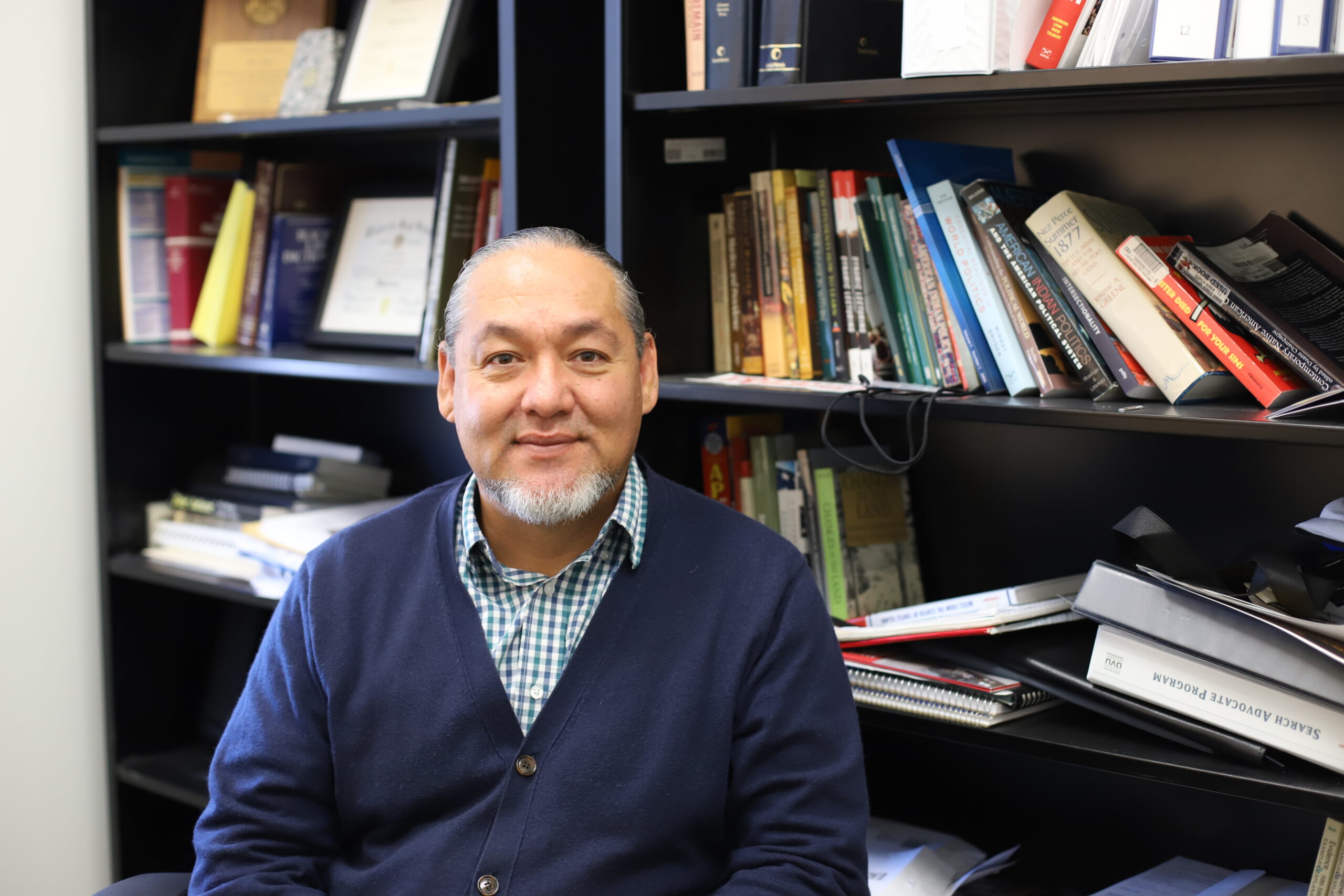 Dustin Jansen originally wanted to be a high school teacher.

Born and raised on the Navajo Nation, Jansen always felt passionate about education. He explored that passion for education by getting a bachelor’s degree in history from Brigham Young University.

As Jansen was finishing up his undergraduate degree, he attended a presentation by Larry Echo Hawk (an SJQ graduate in the Class of ‘73 and member of the Pawnee Nation). This presentation changed the whole course of his career.

“One thing in particular stood out to me,” he said. “Larry Echo Hawk said that law was the lowest common denominator that we all share as human beings in America. It’s something that should apply to all of us the same and it should affect us all the same. It doesn’t always do that, but that’s the way it’s set up. And I wanted to be a part of that, to help people.”

That presentation led him to apply to the S.J. Quinney College of Law to pursue a legal career. Jansen’s interest was in federal Indian law and policy, which fit perfectly with the college’s world-class environmental law program.

Even before his graduation in 2006, Jansen was tapped to be a tribal judge for the Confederated Tribes of the Goshute Reservation. He worked in the tribal court system for nearly fifteen years, including judicial work with Zuni Pueblo and the Navajo Nation Office of Hearings and Appeals. His career took him back to the Navajo Nation as well as to Albuquerque, New Mexico, where he opened his own practice to take on tribal contracts and personal injury law.

When he and his growing family decided to return to Utah, Jansen searched for jobs and found the perfect option for him: a professor of Indian Studies at Utah Valley University, combining his love for education with his expertise in Native American law and policy. He began teaching at UVU in 2015.

“I love working with the students. They are just amazing,” he said.

The Confederated Tribes of the Goshute Reservation heard he was back in Utah and asked if he would be a tribal judge for them again. He accepted, continuing his legacy as an impactful tribal judge.

In 2019, Jansen was approached to be the director of the Utah Division of Indian Affairs. In this position, he would work with the eight sovereign tribal governments in Utah and be a liaison between them and the State. The goal was to repair an imperfect relationship between the state government and the tribal nations. Hesitant at first, Jansen soon realized that this position could make a big difference. In early 2020, he was appointed to the position by Governor Gary Herbert.

“I really enjoy what I do,” he said. “I feel like I’m helping people. I feel like I’m contributing and hopefully making relationships better and stronger. Both the state and Native communities can benefit from these connections.” As a father of four Native children, Jansen sees this as an investment in a better future for his family and others.

Serving as a professor, a tribal judge, and in his government position, Jansen believes he is able to maximize his effectiveness in all three positions, as each position contributes to the betterment of the others.

In honor of Native American Heritage Month in November, Jansen shared some thoughts on how to recognize and honor Indigenous people.

“I think honoring Native American Heritage Month is not only recognizing the contributions of Native people throughout history, but also understanding the role Native people still play today,” he said. “We need recognition that we’re still here as well as recognition for the things that we’ve done to contribute to America.”

It is Jansen’s hope that Native American Heritage month also encourages the SJQ community to research and become familiar with what tribal nations look like today.

“I hope it triggers a desire to learn more about Native people today—to understand that there are 574 federally recognized tribes in the United States,” he said. “Yes, we are a race of people, but also we are political entities, and that’s something that was recognized long before the United States was even established. I hope people understand that these governments are still functioning. They have elected tribal leaders, they have judicial systems and legislative branches, they make laws and rule themselves by those laws. And this is happening today.”