By Michele Straube for EDR Blog.org

We often think of the initiation of litigation as a shot across the bow. A thrown gauntlet. A call to arms that signals the start of a long adversarial contest, at the end of which one party may view themselves as the victor and the other party as the victim. Or not, depending on the court’s ability to fully address complicated issues.

Let’s try to reframe that view of litigation. Especially in natural resource issues, perhaps the document filed by conservation groups to initiate litigation (coincidentally called a “complaint”) is a plea for attention. A cry for help. A desperate hope for creative problem-solving.

At the end of April, two conservation groups filed a lawsuit challenging the National Park Service’s failure to study the impact of cattle grazing on two cactus plants listed under the Endangered Species Act. According to the legal complaint, populations of the Wright fishhook cactus (listed as “endangered”) and the Winkler pincushion cactus (listed as “threatened”) found in Capitol Reef National Park are diminishing in number, allegedly due to cattle grazing.

The issue of the impact of grazing in Capitol Reef NP is not new. The legislation creating the park grandfathered grazing as a permitted use for a limited period of time. The General Management Plan adopted for the park in 2001 acknowledged “adverse impacts from grazing that may affect various species of wildlife and vegetation,” and referenced future planning for the protection and recovery of threatened, endangered and rare species.

Granted, the recently filed lawsuit may change the priority or timeline for the Park Service’s consideration of this issue. [i] On the other hand, if attention is to be paid to the issue, shouldn’t it be done well? In a way that results in a well-informed decision, with future action steps that can and will be implemented and that have a good likelihood of achieving their intended on-the-ground results?

Western Watersheds Project, one of the plaintiffs in the Capitol Reef NP case, was involved in the Tushar Allotments Collaboration, which resulted in consensus recommendations for grazing management changes that have been collaboratively implemented and monitored over the past five years.

The Tushar Allotments Collaboration also grew out of litigation, in that case a challenge by multiple conservation groups to a final environmental impact statement reauthorizing cattle grazing on eight allotments in the Fishlake National Forest. The litigation was withdrawn in exchange for a collaborative approach to the underlying issues co-convened by the Utah Farm Bureau and Grand Canyon Trust (one of the plaintiffs in the lawsuit) that included plaintiff conservation groups, grazing permittees on two representative allotments, the Forest Service, the state wildlife agency and a county commissioner.

The Tushar Collaboration members set themselves an ambitious mission – learn together to identify current conditions on two (of the original eight) grazing allotments, co-create desired future conditions for those two allotments, and problem-solve on-the-ground management changes that would allow the landscape to move from current (less-than-wonderful) conditions to the jointly agreed-upon desired conditions.

The collaboration members spent two field seasons (summers) collecting data separately and together. Despite many (in some cases, passionate) disagreements on scientific methods and the causes of poor current conditions, by the end of two summers everyone agreed that things didn’t look so good on the landscape. I was the facilitator for this group in its second year, and I can tell you that this one moment – the moment each collaboration participant reported back on what they had observed over two summers – was the turning point in the conversation.

The “aha” moment that “we all think something needs to change” was transformative and could not have happened without the relationship-building and mutual learning opportunities provided by the collaboration process.  The group’s remaining work (figuring out how to get from current to desired future conditions) was not easy, but the shared commitment to make a change in grazing management resulted in creative thinking about what changes were possible and could be effective, and how they might be paid for. The collaboration members have continued to work together over the past five years to monitor whether the improvements to the landscape have played out as envisioned, and to adjust accordingly.

I’d like to think the lawsuit filed by Western Watersheds can be the catalyst for a collaborative learning conversation between the National Park Service, the affected grazing permittees, the plaintiff conservation groups, and possibly other interests. Sounds like there is a lot to learn about the endangered cactus – where they are, which activities do and do not threaten them, what might need to be done to protect them (if anything).

The parties to the recently filed lawsuit about cactus all care deeply about the geography in Capitol Reef NP. Through joint learning and dialogue, maybe they can co-create a plan of action that has a good likelihood of success in protecting the two cactus species.

[1] This is not intended to express any opinion about the validity (or not) of the allegations in the lawsuit.

Michele Straube is Director of the Environmental Dispute Resolution Program in the Wallace Stegner Center for Land, Resources and the Environment at the S.J. Quinney College of Law, University of Utah. She recently spent quality time in Capitol Reef NP. 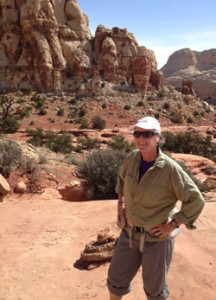