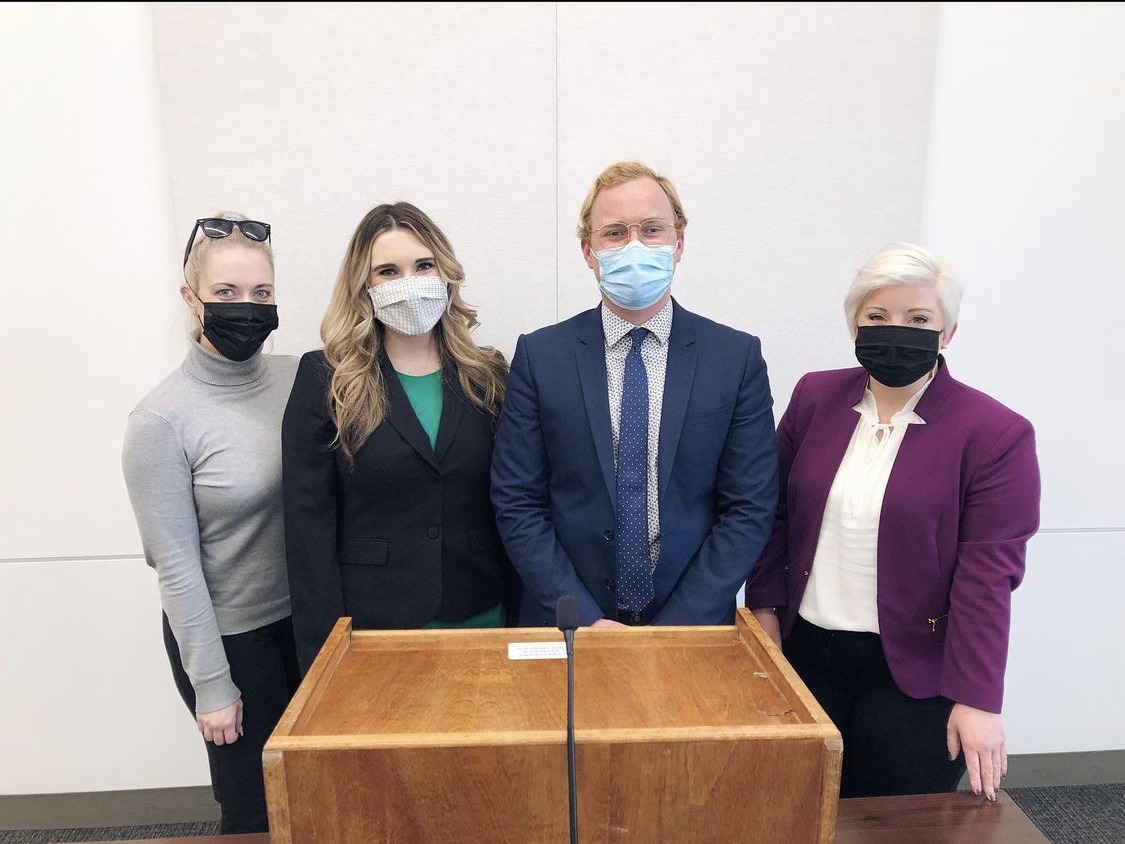 With much of the law school experience transforming to a virtual format due to the COVID-19 pandemic, there was a question of whether the 2020-2021 moot court season would even be possible.

But when considering the benefits of participating in moot court competitions, the organizers and team coaches decided they had to make it happen, even if it was virtual.

“These intense, rigorous experiences help prepare students for the complexities of the legal profession and are great opportunities to develop and demonstrate strengths in research, writing, and oral advocacy,” said Jackie Morrison, director of externships at the S.J. Quinney College of Law and the coach of the Philip C. Jessup International Law Moot Court Competition team.

Members of moot court teams soon learned that their teammates were their biggest supporters.

“We did a great job of maximizing our strengths working as a team to write an exemplary brief,” said Trevor Gruwell, a recent grad who participated in moot court during his 2L and 3L years. “When we started preparing for oral arguments, we each pushed each other to be our best, while also supporting and helping each other.”

For weeks leading up to the competitions, students researched, drafted, and argued complex issues in various fields of law. A thorough understanding of the issues presented was vital for success in each and every competition.

“One of the best feelings was competing with my teammates, knowing they had my back and I had theirs, while also understanding there was nothing a judge could ask us that we hadn’t already seen in practice,” said Gruwell. “I felt confident knowing that I was representing myself and my school well.”

“As someone who hopes to be a litigation attorney, I think moot court is invaluable for my future career,” said Jessi Maupin, a rising 3L who competed on multiple moot court teams. “For any future attorney, the skills that you learn in moot court can prepare you for other classes, summer internships, and any and all research and writing assignments.”

Take a look at the many success the moot court teams had during the 2020-2021 school year.

Result: This was the first year the College of Law competed in this bracket-style competition, which involved teams from 34 different states and territories. Our team did not advance to the semi-final round of the competition, but Ralph Mercer received an advocate award for his performance. The students did very well in an unfamiliar (online) environment, and it was good preparation for the National Trial Competition in February.

Result: Our school made a strong showing, with each partnership winning at least one of their two negotiations and Pam Schools and Rob D’Andrea coming in sixth place overall—just two points short of advancing to the final four. This year’s competition was held in sunny San Diego, but we competed from the comfort of our own homes, Zooming in to virtual negotiations. Although the pandemic posed unprecedented challenges, it created an opportunity for these students to be flexible and adapt to a new environment. They did so with poise, grace, and the highest level of professionalism.

Result: Both teams did an amazing job and BOTH placed among the top 4 teams advancing to the semi-final round of the competition. Our two teams were – Team 2 (Alex Allred, Brady Nash, and Cate Vaden) and Team 1 (Dan Biddulph, Mikayla Irvin, and Jacob Roberts). Unfortunately, because of where they were seeded, they ended up having to compete against each other.

Result: Bond and Lindberg took second place in the finals and were awarded the best written submission.

Result: At the national competition, the team of Alexander Allred, William Brady Nash, and Alice Cate Vaden continued to impress. They won both of their preliminary rounds, and advanced to the “Sweet 16” as the sixth overall team in the competition. They defeated a great team from the University of Florida and advanced to the “Elite 8.” In this round, they argued against a team from Texas Tech University, and, despite a great showing, lost the round. The Texas Tech team went on to place second overall in the competition. Out of the hundreds of teams that competed in both the regional and national competitions, we were so proud that Alex, Brady, and Cate finished among the top eight teams in the country.

Result: Both teams performed well in the National Trial Competition, but neither of our teams advanced to the semi-final round, although one team only missed advancing in the competition by one point.

Result: Trevor, Andrew, and Rob did very well in each of their arguments—they were polished, conversational, and did a wonderful job answering questions. Trevor was named best oralist for the team’s first preliminary round in the competition. The team advanced to quarterfinals and had one of their best presentations yet but unfortunately did not make it to the semifinal round. Trevor, Andrew, and Rob did SJQ proud!

Result: For ten weeks leading up to the competition, the team worked with a fictitious client to draft a merger agreement and prepare a responsive mark-up to an agreement proposed by opposing counsel (another law school team). The team received high marks on their drafting, with judge’s comments including “Team 25’s draft was excellent.” On competition day, the team met face to face (via Zoom) with teams from two other law schools to negotiate the transaction, and were applauded by the judges for their professionalism and understanding of the issues at play. In fact, three out of five judges said our team was the best they saw in the competition.

Result: From September through March, our students researched, drafted, and argued complex issues of public international law as representatives of two fictional countries appearing before the International Court of Justice. Our team went 4-0 in the preliminary rounds of the U.S. regional competition and won the award for 3rd best Memorial (brief). Amanda Fuller also received a Top 20 oralist award at the competition. At the Global Rounds, our team went 3-1 competing against schools from India, Italy, Russia, and Pakistan. Our team ranked impressively in the top quarter of all 571 teams from around the world. Special thanks to Connor Arrington and Steffen Thomas for their invaluable help throughout the year.

Result: This year our team advanced to the semifinals, but unfortunately, we lost out to Santa Clara University. The students faced a much tougher competition than last year, 12 teams total this year as opposed to 6 last year, and made it one step further. They received very positive comments from both panels of judges.

Result: Natalie and Stephanie took first place! This is the first time that SJQ has won this particular competition, which drew approximately forty teams from top environmental programs throughout the country. In the four preliminary rounds, three elimination rounds, and the final oral argument (which was made to four federal judges and broadcast live on YouTube), Natalie and Stephanie represented our school with tremendous skill and professionalism.