By Rick Johnson for EDRblog.org.

It’s a special day when the President of the United States opens the door and invites you in. As Rep. Mike Simpson (R-ID) would later say to President Obama as we stood in a circle around the Presidential Seal on the Oval Office rug, “You know, Rick here has been working on this for thirty years.”

“Personally?” the President asked turning towards me. After I said yes, Obama said, “Well, this must be a pretty special day for you.”

As Obama held my hand, Simpson was right over his shoulder. Looking to Simpson, I said, “Mr. President, it’s a special day for a lot of people.”

“I don’t sign many of these wilderness bills,” Obama said while signing the bill with one of the pens I now have in my office, “But I’ve signed a lot of monument proclamations,” he said with a hearty laugh.

The leverage of a monument proclamation is what made this wilderness happen.

The Boulder-White Clouds is an extraordinary place. Over 150 mountain peaks rise above 10,000 feet. Headwaters to four rivers, this area includes the watershed of the East Fork Salmon River, some of the highest elevation salmon and steelhead-spawning habitat on the planet. Nearly 900 miles from the ocean, the long journey of a Chinook salmon to the White Clouds is about as bruising as the path of Simpson’s bill.

Beginning in 1999, Rep. Simpson began considering how he could protect this special part of Idaho. In 2004, he introduced his first version of the wilderness bill. He would introduce nine more over the next 11 years.

In the beginning, compromise with Simpson was big news. Where else was a Western Republican working to protect wilderness? He wasn’t gaming it, either, using wilderness as a ruse to weaken public land protection. It was a compromise to be sure, but built from the ground up to address local interests. From day one, this included my organization, the Idaho Conservation League.

At first, the Simpson effort was ground down by “the left.” Conservation-minded Democrats didn’t trust this Republican initiative, or at least didn’t want it to succeed on partisan grounds. Simpson was stonewalled.

As time passed–and the majority shifted–conservation advocates increasingly appreciated Simpson’s candor and dedication to getting this bill done.

But Simpson’s own party was coming apart. The Tea Party caucus encouraged even greater gridlock and polarization. Simpson’s bill was going nowhere and his own party was shutting it down. In an unforgettable Senate hearing, after introducing a mirror to Simpson’s bill, Sen. Jim Risch (R-ID), who’d supported the bill as governor, withdrew his support.

The Idaho Conservation League (ICL) had ridden this as far as it could go. We’d brought this issue to Simpson. We’d worked very closely with him, day in and day out. We’d worked through the compromises–and at times were criticized for making them. But we’d also grown from the experience. ICL’s strategies and culture evolved greatly over these years, as lessons learned from the Boulder-White Clouds wilderness effort fostered ICL’s development into Idaho’s leading voice for conservation.

But it was time to shift strategies.

Former four-term Idaho Governor Cecil Andrus was the first to call the new play: a national monument campaign. As Interior Secretary, Andrus famously used the presidential authority to create monuments under the American Antiquities Act with President Carter in Alaska, creating the catalyst for one of history’s greatest conservation achievements. Looking to the Obama Administration, Andrus said, “You have a real opportunity here. Don’t overreach. Get it done.”

With many partners, we built a robust national monument campaign. The effort was controversial with some Idaho interests (this is a very red state), but few could quarrel with the fact that we’d tried mightily to get it done with Simpson first. A monument could get it done.

In September 2014, at a 50th anniversary dinner for the Wilderness Act in Washington, DC, we set up a meeting between Obama’s senior advisor John Podesta and Rep. Mike Simpson. Here Simpson learned how serious–and likely–the monument effort was. He then asked for six months to try to pass his bill once more. The assumption was that if he failed again in the new Congress, he could stand down on the monument.

As the new Congress opened in the winter of 2015, a number of interests who’d opposed Simpson’s wilderness bill–but who liked the prospect of a less certain Obama initiative even less–started getting involved. One of those was Sen. Risch.

The first congressional hearing, in the Senate, was in May. In late July, the bill moved out of the US House without objection. Within the day, the bill was offered to Senators. Barring objection, it would pass, but late in the afternoon, Sen. Ted Cruz (R-TX) put a hold on it. There it held for the weekend of August 1. On Tuesday, the hold was lifted, and after a short bit of maneuvering, the bill passed the Senate. It was through both houses without objection. 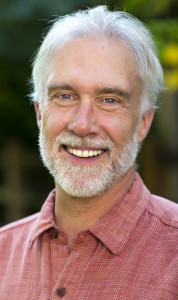 The call from the White House came on Wednesday. On Friday, August 7, we stepped into the Oval Office.

In 1986, I helped create ICL’s Wild Idaho conference, an event we hold annually. A first speaker was the conservationist Brock Evans. When asked how to succeed on conservation advocacy, he set the path we’d travel for years to come: “Endless pressure, endlessly applied.” Or, as a congratulatory email said after we’d left the White House, “Never f&*ing give up.”

Rick Johnson, executive director of the Idaho Conservation League. Rick has run Idaho’s leading voice for conservation for over 22 years and began working to protect the Boulder-White Clouds as a volunteer in the early 1980s.