by Natalie Watkins for EDRblog.org. 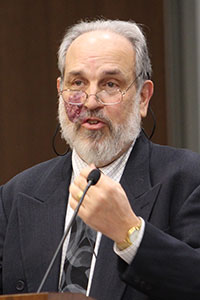 Larry Susskind is the Ford Professor of Urban and Environmental Planning at MIT, the founder of the Consensus Building Institute, and a leading theorist in the field of public sector dispute resolution. On March 30, he met with students and professionals at the University of Utah College of Law for an enlightening Q & A Fireside Chat. Topics discussed ranged from his personal career path to the role of elected officials as conveners of collaborative processes. The Fireside Chat followed Larry’s Stegner Lecture, during which he spoke about Managing Climate Risks in Resilient Cities. His Stegner Lecture stressed the importance of focusing on “adaption now!,” inclusion and consideration of diverse stakeholders’ perspectives in adaptation planning, and moving beyond discussion to the “do something” stage of resiliency-building. These events kicked off the 21st Annual Wallace Stegner Symposium Green Infrastructure, Resilient Cities: New Challenges, New Solutions held March 31 and April 1, 2016.

This blog summarizes Larry’s responses to the questions posed during the Q&A Fireside Chat.

What got you interested in dispute resolution and collaboration?

I was trained in the 1960’s at MIT as a city planner. It was an exciting time in U.S. history. Students fought for a focus on social change in the city planning curriculum. As cities tried to involve more citizens in redevelopment efforts, they had to invent ways of ensuring meaningful public engagement. It was clear to me that the planners needed to invent ways of helping to reconcile or resolve conflicting public demands. I was part of that effort.

I was later contacted by a law professor about bringing together a diverse set of mediators. I didn’t consider myself a mediator, but I was glad to be included. As it turns out, public participation in planning is a form of dispute resolution when consensus building is done properly. Today, all planners need to know how to handle multi-party negotiations.

What role does technology play in negotiation and dispute resolution?

I have experience facilitating public engagement using live polling via apps or text messaging. I feel strongly feel that social media and new technologies are going to play a major role in the future of public engagement and dispute resolution. The struggle now is to codify what we have learned so far while continuing to improvise. Technology is also important in all kinds of negotiation training; for example, I recently launched a six-week online course through MIT about entrepreneurial negotiation to help people work through the problems they face trying to start up a new business.

What is the best role for scientists to play in the context of negotiations and consensus building processes?

I work on science-based issues; so, I care a lot about the role that scientists play in public dispute resolution. The question is how to ensure that credible scientific information is accessible to all sides in public policy disputes. We need scientists to:

Is it a neutral facilitator’s responsibility to know the science? And can you speak to different roles scientific experts can play in collaborative processes?

A facilitator must be literate in the substance of the issues being negotiated. Facilitators and mediators don’t need to be technical experts, but they better be “quick studies” who are curious about the science behind the issues.

Additionally, scientific and technical experts can be included as part of mediation teams or as scientific advisors to mediation processes. They can help by:

Is “getting to yes” scalable to multi-party negotiation?

In part, yes. Scaling, however, isn’t the key concern. Coalitions always emerge in multiparty negotiation and getting to yes doesn’t address coalitional behavior. A multi-party coalitional effort will seek to achieve desirable results by involving everyone in problem-solving or value creation. Here is the advice I would offer negotiators in multiparty negotiations who want to help the stakeholders create as much value as possible: first, have a mediator (the “n+1th” party) serve as the eyes and ears of the process; second, have this helper think about value creation in multi-party terms; and third, if the parties can’t come up with value-creating packages or trades, ask the mediator to suggest multiple packages that would allow all parties to exceed their Best Alternative to a Negotiated Agreement (BATNAs).  Negotiation is easier in two party negotiations where the BATNA may be fixed. In multi-party negotiations, BATNAs are changing constantly which makes it difficult.

Post disaster planning is highly stressful with lots of emerging interests and time constraints. How can we collaborate effectively within these constraints?

Post disaster is too late to be talking about these things! Multi-party negotiation about emergency preparedness is the key. Flooding in Malaysia is an example of this – people will rebuild their homes after the floods in the same place they stood before the flood. What is needed is a community-wide discussion about how to reduce vulnerability and enhance resilience BEFORE the next year’s flood. Creating and testing an early flood warning system where police notify villagers of impending danger so they can flee in time would also be a good idea. The issue is preparedness! Collaborative problem-solving needs to occur before the next emergency.

A key question is: who is responsible to facilitate such discussions? In my view, it is civil society, not the government, which operates too slowly. Civil society should take the initiative to generate proposals and invite government leaders – in their unofficial personal capacity to participate in citizen-led events. The product of these discussions should then be carried by these officials into the right decision-making forums. The two important items here are that the collaboration needs to occur before and not after disaster strikes and that civil society needs to take the initiative in general proposals (that meet the interests of all stakeholders) that officials can then adopt.

How do we get people to the table to discuss resiliency without a crisis looming?

Efforts to gather stakeholders should begin with a stakeholder assessment. No crisis is required. People need only spend a few minutes talking to a mediator or a neutral facilitator. They don’t have to commit to attend multiple meetings. The results of these conversations can be used to ensure the public that their concerns are being used to shape local discussions of resilience. When people see that they have helped to shape the agenda, they will be more inclined to participate. Also, groups need to be given a chance to caucus to choose a representative to participate in adaptation specific discussions. If people are chosen by their constituents, they will take the invitation to participate more seriously.

How can we help people see the financial value of stakeholder assessments? What is your advice to frame the assessment so it is digestible?

How do we discover when issues should just go to court because there is too much to lose in the negotiation process?

Setting a legal precedent can sometimes be the only way forward. In my experience this happens less than 15% of the time. When key parties rather go to court than come to the negotiation table because they want to set a legal precedent, I understand that. There are other circumstances where there is a mandated timeframe in which agreement must be reached. When there is not enough time for a problem-solving negotiation, I understand that. I’d rather not start. Most of the time, though, when officials say that consensus building is too slow and they need to move authoritatively, they are underestimating the delays that will be caused by the failure to involve people in decisions that will affect them.

Is there a context where using an unofficial facilitator is acceptable?

Yes. But, this only works if the unofficial facilitator is really neutral. Hiring a neutral facilitator is almost always worth the financial investment. Be wary, though, of those in the legal field who act as advocates half the week and agree to mediate the other half of the week. I don’t think this works very well. Perceptions of neutrality are always a concern. People who claim to be neutral better not have any conflicts of interest, or perceived conflicts of interest.

What role can elected officials play as conveners in consensus building?

Conveners are always needed. Because all public policy proposals need to be approved by decision makers before they can actually be implemented, elected officials should almost always be the conveners of public dispute resolution efforts. Conveners are not neutrals. They invite everyone to come together and help to ensure that a qualified mediator is on hand to assist. They can also use their influence to ensure that all the relevant stakeholders agree to come to the table – this is a key role of conveners! Conveners sometimes have the challenge of finding proxy representation for parties that can’t or won’t come to the table, like future generations, the environment, or vulnerable populations. If elected officials have concerns about the details of what is being discussed, they can have their staff participate as stakeholders. Problems occur when conveners try to play the role of facilitator. I’ve written about this in my little book called Breaking Robert’s Rules (Oxford, 2006).

Natalie Watkins is a graduate student in City & Metropolitan Planning at the University of Utah. She is a native of Salt Lake City, UT and views negotiation and dispute resolution as essential tools in managing quality growth in the Intermountain West.