By Griffin Smith for EDRBlog.org

People being viciously attacked—verbally and physically—just because they are a certain race, ethnicity, religion, or simply trying to fly war torn countries. Vitriol flying back and forth across social media. Friends, neighbors, and even family members that no longer speak to each other because of how they voted in the last presidential election. Politically motivated shootings of politicians. We live in divided times. The question is: what can we do to heal our nation’s rifts?

Nationally recognized speakers and almost 100 participants from around the region and across the country came together at the S.J. Quinney College of Law on June 15th to address this question, specifically how to foster productive dialogue and restore civility amid our current social and political challenges. The Dialogue on Collaboration on “Fostering Productive Dialogue in Divided Times” was hosted by the Environmental Dispute Resolution Program in partnership with The Langdon Group, the International Association for Public Participation (IAP2) Intermountain Chapter, and the Utah Council on Conflict Resolution (UCCR).

The event could not have been more timely: only the day before, Congressman Steve Scalise was shot in Alexandria, Virginia, in what is considered a politically motivated act—a visceral reminder of how vitriolic the political rhetoric and ideological divides have become in our country.

During the event, Michele Straube, the outgoing Director of the Environmental Dispute Resolution Program, described dialogue as meaningful conversation in which people focus on learning from each other and together with others. Dialogue, she explained, centers around people trying to better understand each other and each other’s views. It requires approaching interactions with curiosity, authenticity, vulnerability, and empathy. Through doing so, we can embrace our similarities and differences and potentially begin to work together to address shared concerns.

Three panelists shared their experiences with fostering dialogue. Larry Schooler, who directs community engagement and public participation projects for the City of Austin, Texas, highlighted the challenge of empowering citizens to take a meaningful role in governance, rather than simply being “consumers of government.” He emphasized that doing so necessitates creating inclusive environments and planting the seeds for meaningful dialogue. He suggested this type of public engagement empowers the unengaged, fosters civility, increases community capacity, and allows people to see differences with curiosity rather than mistrust. Larry concluded with the sage advice: listen to others with the intent to understand, not to reply.

Donna Silverberg, a mediator and the owner of DS Consulting, emphasized the importance of the “5 Cs” in facilitating dialogue: clarity, commitment, curiosity, consciousness, and courage. Clarity of purpose allows people to know when and why to engage with each other—how to communicate, act, decide, and define success as a group. Having a commitment to a shared purpose, process, and each other ensures groups can productively work through differences. Curiosity enables people to engage one another with an open mind and to “speak as though they are right and listen as though they may be wrong.” Consciousness ensures people fully see and grapple with the impact of the dialogue on others and on themselves. Finally, she noted, no progress will be made if parties lack the courage to engage with one another and with the essential challenges in front of them. Donna illustrated the role these elements play by sharing process examples from the development of water quality standards in Oregon around fish consumption.

Carolyn Lukensmeyer, the Executive Director of the National Institute for Civil Discourse at the University of Arizona, began by acknowledging her state of mind in the wake of the June 14th shooting, noting her institute was founded in the wake of the shooting of Arizona Representative Gabrielle Gifford. Carolyn warned that this latest shooting symbolizes the fraying of US political and civic culture. She emphasized that hate speech increasingly leads actual physical violence. She pointed to the critical role of leadership in changing the nature of discourse and behavior. She also noted that constituents must pressure their elected officials to change their behavior through letters (especially postcards), phone calls, and office visits. Carolyn shared her institute’s Commitment to Civility initiative where politicians sign a pledge to work together in a productive, non-hyper-partisan manner. Carolyn closed her presentation by showing an example of how it’s possible for even the staunchest of foes to find common ground.

During the panel discussion, the panelists and audience identified several additional ways to encourage productive dialogue, including:

Danya Rumore, the incoming Director of the Environmental Dispute Resolution Program, then introduced the concept of civity (yes, that’s spelled correctly). Civity is a culture of deliberatively engaging in relationships of respect and empathy with others who are different to develop a “we all belong” mindset. Exercising civity requires intentional interactions with others, acting with authenticity to acknowledge our shared humanity, and embracing and reaching across differences to create a sense of belonging. Danya highlighted that “with rights come responsibilities” and that civity, by bridging societal gaps, establishes the fundamental social fabric necessary to work from to problem solve together.

Dialogue participants engaged with concept of civity and practiced effective dialogue through a series of exercises. We shared our stories of why we do the work we do as authentically and intentionally as possible without interruptions, explored (and attempted to embrace) differences in communication styles, and brainstormed how to foster higher quality dialogue. Many people found new connections with those they talked with and explored simply “being humans together” without attack or judgement.

Dan Adams from The Langdon Group closed the day by reminding us that we, as mediators, facilitators, public officials, and/or citizens, don’t have to do our work and live through our experiences alone, and urged us to connect with other people to share our successes, failures, and burdens. He also suggested that fostering real dialogues means putting in real effort to engage those with different opinions (that is, you can’t match the level of effort you put into your communication with how you feel about the person).

On the eve of Independence Day, the day on which we celebrate the America becoming a country of “united states,” it’s worth remembering that only through effectively talking with and understanding each other can we thrive as one nation “indivisible, with liberty, and justice for all.”

A video of the Dialogue on Collaboration: Fostering Productive Dialogue in Divided Times presentations and panel discussion is available online: https://www.youtube.com/watch?v=Jc8Plu-GATU&feature=youtu.be 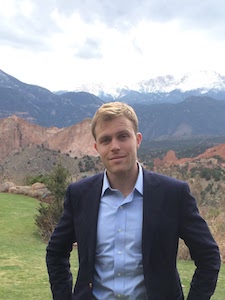 Griffin Smith is a Priscilla King Gray summer fellow at the University of Utah’s Environmental Dispute Resolution Program and a graduate student at the Massachusetts Institute of Technology. At MIT, he studies policy and urban planning and researches international sustainability and stakeholder engagement with Larry Susskind. Before graduate school, he worked at the Consensus Building Institute in Cambridge, MA and at a honeybee sociogenomics lab. He is originally from Colorado Springs, CO.