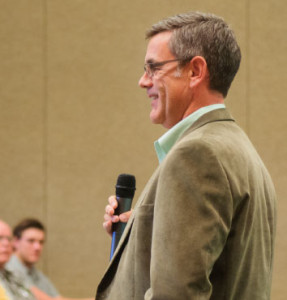 By Dan Adams for EDRblog.org.

This month marks my 20th anniversary of being a mediator and facilitator! I have been pondering my career, assessing my experiences, and thinking about areas in which I want to grow and develop. I also recently had the opportunity to co-facilitate the Utah Forum on Collaboration on November 19, 2015. The Langdon Group and the Stegner Center’s Environmental Dispute Resolution Program brought together executives from nearly 30 federal and state environmental and natural resource agencies for a day to discuss collaboration at the University of Utah S.J. Quinney College of Law.

Forum participants had the opportunity to share their experiences, successes, failures, and challenges in working within and across agencies as well as with non-agency stakeholders. I observed that participants have a lot in common and the challenges they face are also very similar. Through listening to their stories and reflecting on my own personal work history, I want to share four common principles that support effective conflict resolution and collaborative problem solving.

To be notified when new EDRblog articles are posted, please sign up for our listserv here.

Throughout this post, I refer to us as “we”. By this I mean ALL of us. Whether you are a professional in conflict resolution or John Q. Citizen, we all are put into situations in which we need to help solve problems and help resolve conflicts. We is us!

A tradition in the much of the world is to shake hands when we meet and refusal to do this is the ultimate slight. This was clearly illustrated in a recent Mixed Martial Arts bout between then undefeated Rhonda Rousey and Holly Holmes. Rousey refused to touch Holmes’s gloves to start the fight. The irony was that any viewer was taken back that Rousey wouldn’t touch gloves when moments later the fighters would proceed to beat each other senseless (Holmes would go on to win the fight). Even in a “fight,” the failure to shake hands, or in this case touch gloves, communicated lack of respect and a failure to validate.

I am fascinated by changing cultural norms. Our world is getting very tiny, very fast. Social media and exposure to other cultures makes it very tempting to create new norms and ways of doing things. Sometimes it’s the little things like shaking someone’s hand at the start of a meeting that we don’t do. But, I maintain that the role of touch in establishing validation and respect will always have a place. We need to be fearless in extending the hand of fellowship (literally) to help resolve conflict in a meaningful way.

Social scientist Brené Brown discussed vulnerability and shame in her popular 2010 and 2012 TED talks. She discusses the difference between guilt (“I made a mistake”) and shame (“I am a mistake”). Shame is an unspoken epidemic, driving many forms of broken behavior and our need to be invulnerable. Mediation, collaboration, and conflict resolution processes rely on helping people be vulnerable. Brown theorizes that vulnerability is not weakness, but rather, a trait of strong and truly successful people. When people finally allow themselves to be vulnerable and verbalize what their interests and needs are, true collaboration can begin. As practitioners, it’s our job to help them get there!

Recently, I was working with a Great Basin rancher. As we discussed his concerns and frustrations about ranching and the regulations on federally owned land, he was able to identify a personal need for authenticity which illustrates how important this is to human interaction. The perception of federal (and sometimes state) “overreach and heavy handedness” is exacerbated by perceived lack of authenticity. Authenticity is secret sauce for respect, validation, and vulnerability. It is looking someone in the eye, being a straight talker but not being overbearing. It’s having a firm handshake but not overdoing it. Being truly authentic can be a very difficult thing to figure out.

A task I (and most mediators) often do at the start of a collaborative process is conduct an assessment by meeting one-on-one with key stakeholders on their turf. I find that most people open up, are vulnerable in one-on-one settings, and can be more authentic. Even in protracted and emotional conflicts, many people display vulnerability and talk about their own contribution to the problem at hand. They admit where they could have done things differently or better. They talk about similar and related experiences they have had. Yet, when we convene with all parties in the same room, the vulnerability shared in the assessment disappears. It seems that it is our human nature not to let ourselves be seen as vulnerable because we don’t want to be viewed as a failure, become embarrassed, or be seen as making a mistake. Being vulnerable is part of the magic to being authentic.

As collaborators in our personal and professionals lives, we can often predict where there is going to be conflict. We need to find ways to get people talking well ahead of conflict. For example, folks in Oregon have developed a number of regional collaboratives designed to engage diverse stakeholders in dialogue and develop relationships before problem solving or conflict occurs. In 2014, one of these collaboratives enabled the U.S. Forest Service to complete two Environmental Assessments in less than a year with no litigation for a 40,000 acre grazing allotment and a 40,000 acre timber sale.

The trick to being proactive is to help diverse (and maybe previously adversarial) stakeholders achieve Bruce Tuckman’s 1965 group development model. Remember this one? Tuckman’s idea was that groups go through four basic stages: Forming, Storming, Norming, and then Performing. Forming (convene), Storming (learn how each other work, trust, identify commonalities and cultural differences, etc.), Norming (trust, work together, socially engage, etc.), and Performing (motivated, knowledgeable, and focused on achieving common goals). The regional collaborative idea is to help groups reach the “performing” stage and then look for projects and issues to solve collaboratively.

Albert Einstein once gave the definition of insanity as, “doing the same thing over and over again expecting different results.” A proactive relation-building approach can help us have a little less insanity by forming collaboratives that have “normed” and continually “perform”.

There are basically five levels of engagement: Political (elected officials), Policy (political appointees), Program (program managers), Project (project managers), and the Public – the 5P’s. All too often, agencies engage to solve a problem but those assigned to the “project” are not empowered to make decisions. They are de facto negotiators without negotiation authority. To help solve this problem, we need to early establish peer-to-peer relationships, secure full engagement from decision makers, and ensure participants collaborate vertically (internally) and horizontally (across agencies). If we do this early and continuously, the odds of success radically increase.

In the coming months, the progress made towards collaborating more effectively at the Utah Forum on Collaboration will continue through Quarterly Dialogues. The leaders of the nearly 30 state and federal agencies are truly and deeply committed to collaboration! They are continually looking for ways to improve the collaborative process. I invite you to look at your career and what have you learned. Are you expecting different results but doing the same thing over and over? If so, change it up! Maybe one of these ideas will help you to do that.

*Note: For more information on the Utah Forum on Collaboration, please see the Forum Manual and Guidebook (including “how to find a mediator/facilitator,” case studies, and other collaboration resources) as well as the Summary notes from small group discussions.

Daniel R. Adams, M.A. is a mediator/facilitator, public involvement strategist, and organizational development consultant. Mr. Adams is known for his ability to look at problems from a holistic approach that incorporates his expertise in business, conflict resolution, organizational development, environment and public policy. Dan has led the Langdon Group since 2004 which has four offices in western states. He is known for not just great dialogue and collaboration, but also for helping assess barriers to successful implementation and execution of plans and projects and then helping get work done.