By Carlos Quijada for BioLawToday.org

The US is experiencing frequent mass shootings and gun violence, and we don’t seem to know why.  In 2015, the Center for Disease Control (CDC) estimated 36,252 people lost their lives in the US because of gun violence, a significant 7.8% increase from 2014 The American Medical Association (AMA) has declared gun-related deaths a public health crisis. (The CDC is very careful in mentioning “guns” or “firearms” and avoids declaring their misuse as an “epidemic” or “crisis.” CDC researchers list the outcomes of misuse instead (i.e. suicide by firearm, firearm related injuries, etc.).  So why is it we, as a nation, do not have answers to fundamental questions such as: How are illegal weapons tracked? Who are the victims and why? Can gun-related suicides be predicted?

To answer these questions, we need data based on objective scientific research. However, the federal government is spending less annually on gun violence research than private organizations and citizens.  Currently, gun violence research is not a federal priority, unlike other public health concerns with similar and lesser fatality rates.  For instance, in 2014 the CDC reported 33,736 motor vehicle-related deaths and 33,594-gun-related deaths. With a difference of 142 deaths (0.2%) between vehicular and gun related deaths, one may rationally believe the two would have the same level of research priority; unfortunately, they do not. The CDC requested $10 million for gun violence research each fiscal year from 2013 to 2016 while the National Highway Traffic Safety Administration (NHTSA) requested $908 million for vehicle and behavioral safety research and to fund state grants. The CDC even allots $6 million for research into fatal prion disease that kills approximately 300 people a year in the U.S. So why won’t the government spend the money and resources on gun violence research?

The 1996 Omnibus Consolidated Appropriations Bill for Fiscal Year 1997 known as the controversial “Dickey Amendment,” is an appropriations bill backed by the NRA, which essentially directs how to spend federal funds. The Dickey Amendment included language that stated: “none of the funds made available for injury prevention and control at the Centers for Disease Control and Prevention (CDC) may be used to advocate or promote gun control.” As read, the amendment does not explicitly state the CDC must not research firearms or gun violence. It was Congress taking away the CDC’s entire budget of $2.5 million earmarked for firearms and gun violence research that led to the self-imposed ban. A move likely made by the CDC to prevent further Congressional reprisal on other fund-dependent research.

The late Rep. Jay Dickey (R-AK) regretted the chilling ripple effect his bill had on research. In 2012, in the aftermath of the Aurora, Colorado movie theater massacre of 12 people, Rep. Dickey stated to the Washington Post, “Firearm injuries will continue to claim far too many lives at home, at school, at work, and at the movies until we start asking and answering the hard questions…Scientific research should be conducted into preventing firearm injuries” A few years later Rep. Dickey told abcNEWS, “I wish I had not been so reactionary, Scientific research… it’s our responsibility…It’s silly for us to watch this nonsense take place, without doing something”

One month after the massacre of 28 people, including 20 children, at the Sandy Hook Elementary school in Newtown, Connecticut, President Obama took administrative action to spur gun violence research. On January 16, 2013, President Obama released his Presidential Memorandum to “end the freeze on gun violence research.” The CDC was directed to research the causes of gun violence and the ways to prevent it; however, Congress holds the purse strings. The former President sent a request to Congress to increase the CDC’s budget to $10 million, but even with the modest bump in federal funds, research was not spurred into action as Obama hoped for.

Gun violence research has been taboo in the scientific community because it means loss of research funding or even one’s career. In an interview with abcNEWS, Dr. Kellermann of RAND research stated, “Precisely what was or was not permitted under the clause was unclear … but no federal employee was willing to risk his or her career or the agency’s funding to find out.” Despite the self-imposed ban on gun violence research by the CDC, and with the limited funding made possible via the Obama administration, the National Institutes of Health (NIH) and the National Institute of Justice continued to issue grants to fund research on gun violence. Although the grants paled in comparison to those awarded to other issues affecting public health, the NIH awarded $14.7 million in major gun research grants from 2014 to 2017 and NIJ awarded approximately $14.9 million (Among the U.S. states, the State of California also continued research on gun violence. In 2015, California legislation issued a $5 million grant to the University of California to establish its state-funded research center University of California President Janet Napolitano stated, “The state’s decision to provide public funding for a center to study firearm violence — the first of its kind in the nation — demonstrates great leadership by the state and presents a unique opportunity for the University of California to be at the forefront of researching a growing public health issue.”

Private organizations fund gun research to various degrees. The Joyce Foundation of Chicago, IL provides grants toward gun violence research and education. Joyce helped establish a central database, the National Violent Death Reporting System, now a project of the Centers for Disease Control and prevention.  In 2014, former New York Mayor, Michael Bloomberg donated over $50 million of his wealth to establish “Everytown for Gun Safety,” a nonprofit organization which advocates for gun control and against gun violence He intends Everytown for Gun Safety to be well-funded and to rival the NRA. After the Las Vegas mass shooting, Mayor Bloomberg committed to personally match dollar for dollar every donation to Everytown

While organizations like the Joyce Foundation, Everytown for Gun Safety and the Brady Campaign try to fill in the financial and knowledge gaps left behind by a seemingly negligent government, many citizens of the U.S. remain fearful of the next mass shooting. How will we predict the next mass casualty event? Or prevent it? Will it be at the next public Christmas tree lighting or 5K run? Without federal funding equal to an amount worthy of the severity of this public health crisis, gun violence research will remain inadequate, and our knowledge gap will inevitably widen. 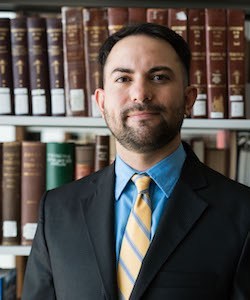 Carlos Quijada is originally from Venezuela and moved to Utah from Florida. He studied Biology and Public Health at the University of Florida and proceeded to work in the Caribbean Island of Saba. Passionate about science and policy, he found the transition to Law School was a natural fit. His interests include intellectual property, health policy, and human rights. He runs a pro bono legal clinic and enjoys supporting a number of student organizations. He is also in the US Navy and has served a tour in Afghanistan. In his free time, Carlos loves to hike and travel. Grateful for a great group of family and friends, Carlos makes sure to spend quality time with them. His fellowship is funded by Ancestry.com and he is working on legal issues raised by new developments in genetics.