By Steve Greenwood for EDRBlog.org 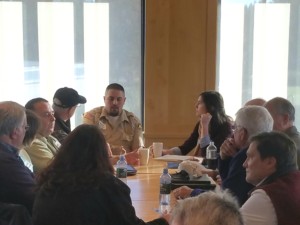 One of the key characteristics of successful collaborations, particularly when parties are trying to resolve difficult issues, is authenticity.  As a facilitator, I work to encourage participants to express their real thoughts, questions, emotions, and concerns – while still being respectful of one another.

In too many groups, the incentive and the group norm is to do just the opposite.  Particularly when things get tense, there is often a tendency to just go through the motions, to act “collaboratively” while skirting the real issues.  I often refer to these sorts of meetings as “Kabuki Theater,” where everyone has their mask on, and a stylized role to play.  The resulting atmosphere in the room is often one of guardedness, resignation, and – ultimately – cynicism about the process.

One way out is for someone to take a risk and act authentically: to express their natural human frustrations, fears, and questions. In other words, to be real.

It takes courage to be authentic in these settings.  To be real is to be vulnerable.  Though paradoxically, this willingness to be vulnerable can be highly powerful; it conveys to others a sense of self-confidence and also communicates a sense of trust in the others at the table.  And as Ostrom, Balliet, and others writing about collaboration point out, that kind of trusting behavior often begets trusting behavior in return.

However, sometimes being “real” means expressing values or emotions that won’t be well received by others at the table. In a recent conversation with my colleagues at the National Policy Consensus Center, I was reminded that the response to that first act of authenticity can make all the difference.  If it is ignored or responded to with anger or embarrassment, it may prove even more difficult for other to express themselves authentically.  The facilitator or mediator can often help in these situations by re-framing the message in a way that the response to it is constructive and helps the group move forward.

I believe that there is something else that adds to the powerful impact of authenticity.  Being real allows our common humanity to emerge.  We step out of our mask, our appointed role, and become human.  That common humanity binds us, despite our differences, and creates a mutual affiliation that research shows also builds trust and facilitates agreement.

What does this look like in an actual meeting? Recently, I was facilitating the discussion of a collaborative group that was meeting for the first time.  While introducing herself, one of the participants broke down describing the challenges faced by her special needs daughter.  She was somewhat embarrassed at her own show of emotion, but it completely transformed the group, providing the emotional space for other members to express their real feelings.  The group soon demonstrated a cohesiveness I’ve rarely seen in almost 20 years of professional practice.

It also reminded me of a time, years earlier, when I facilitated an important bi-state discussion of about 25 stakeholders, on sediment management issues in the Columbia River.  The group was co-convened by the two Governors’ offices, but members had a long history of extremely acrimonious relations.  The first day of discussion went fine, but one got the feeling that not much of consequence would change.

At the beginning of the second day, to the surprise and shock of all participants, I approached the podium with my guitar in hand. Days earlier, I had composed a humorous and somewhat bawdy song about some of the parties involved in the dispute.  Though I thought some in the group might appreciate the humor if I sang it, my better professional judgment said, “Too risky.  Don’t do it!”

My better judgment lost.  And so the second session began with me singing a song that could easily have offended some participants.  But a strange thing happened.  The song got a rousing reception, broke some of the tension, and nobody laughed louder than those lampooned in the song.  And at the conclusion of what proved to be a highly successful and productive day of negotiating, these people who had at times been bitter enemies all wanted their picture taken together.  One person later said, “We’ve been fighting each other for more than a decade, but we’ve made more progress these last two days than we have for the past 10 years.”

I’m not suggesting music or bawdy humor as a facilitation technique.  But the lesson I learned is that the music and experience of laughing together humanized the entire process.  The tension went out of the room, and people were able to get down to business.  Recognizing their common humanity enabled them to take off their masks.  They were ready to have an authentic conversation.

We as facilitators and mediators have a responsibility to help people have that authentic conversation.  To remind people that we are all human beings, and though we may represent organizations or constituencies with widely divergent interests, by being real with each other, we have the potential to do something real.

Steve Greenwood is the Director of Training and Academic Services for the National Policy Consensus Center at Portland State University. He is a former Director for the Oregon Solutions program and a senior practitioner who has designed, facilitated, and managed nearly 100 collaborative governance processes over the last 15 years.