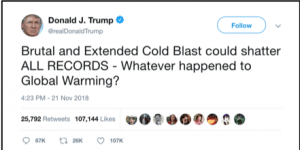 Concern about functional public discourse and decision-making has risen sharply in the U.S. since the election of Donald Trump with some questioning if we are existing in a post-truth era. Indeed, we often hear cries of “fake news” or see seemingly, to some, blatant conspiracy theories gaining widespread traction among members of the public. While there are many reasons that can be, and are, cited for this erosion of commonly held agreement about which pieces of information constitute facts, Roger Pielke’s work The Honest Broker: Making Sense of Science in Policy and Politics (2007) offers a framework to analyze the role that facts and values play in public discourse that not only helps to understand how we got here, but provides insights to help make positive steps forward relevant for all those involved in environmental problem-solving.

A central point in Pielke’s work is that science has a very limited scope in which it can suggest a course of action; only in problem-contexts where there is agreement on desired outcomes, as well as little ambiguity surrounding courses of action and anticipated results can science point the way. It is hard to think of a problem of significance in society today in which there are not conflicting interests and differing desires for outcomes; indeed, Pielke points out that there is often debate about whether a problem even exists to be solved. Therefore, science alone cannot tell us how we should resolve the majority of our pressing societal problems.

Pielke asserts that in these complex situations, the answer to which direction we should take or which policy or plan to adopt, must be resolved via debates about the values we wish to uphold. However, in politics there is a tendency to avoid these debates and instead mask value preferences with scientific facts. In such complex problem situations there is enough scientific uncertainty to fuel claims on both sides, and consequently, the debate focuses on the merits of each side’s science instead of the underlying values, which “can lead to political gridlock, bad decisions, and threaten the sustainability of the scientific enterprise” (Pielke, 2007, p. 38). We can see this in the debate over climate change: individuals who value maintaining the status quo highlight the scientific uncertainty that exists whereas individuals who value reducing future risk counter with other facts, which shifts the focus from the underlying values of these positions and the overall scientific consensus on climate change. Thus, Pielke’s framework helps make the prevalence of debates, and even some of the seemingly more outlandish claims, about scientific facts a bit easier to understand.

How then does this relate to environmental dispute resolution? Well, as Pielke points out many environmental problems are those in which both facts and values play a prominent role and therefore, ones in which we must be careful about how we use both. We need facts to better understand the problem-context and alternative courses of action, but it is our values, not the facts, that answer which direction we should move to resolve the problem. For example, even if we had 100% consensus on all of the facts around climate change, science still couldn’t answer if the present-day benefits some receive from the status quo outweigh the costs of change posed to others.

However, the fields of planning and policy, where many of these dialogues and processes take place, evolved from a historical desire to cleanly separate facts and values and incorporate the facts into a “rational,” value-free decision making process wherein the facts provide clear direction. Some scholars assert that movement has been made in these fields to more openly acknowledge the role of values and normative policy preferences; however, others focus on the work that remains to be done, asserting that many policy analysts, planners, and those in related fields such as scientists and economists are quite hesitant to associate themselves and their decision making tools with anything as subjective as values, even if those values influence the questions they ask, the analysis they conduct, and how they show up at the table. In general, individuals may perceive “value differences as . . . [so] personal, subjective, irrational or spiritual” that they are “virtually undiscussable” and avoid even broaching the issue (Forester, 1999, p. 464). Thus, many of the folks sitting down to an environmental dispute resolution table may have a very hard time acknowledging the values that underlie their positions.

Yet, in dispute resolution, participants understanding of their and others’ values can be critical to the process of opening up mutual-gains solutions (Forester, 1999). Participants discovering and listening to each other’s values can offer the potential to find new solutions that better meet those deeper values or interests than what they initially came to the table with, without necessitating that the participants share the same deep beliefs (Forester, 1999). Returning to the climate change example, perhaps a conversation that reveals a shared interest in a healthy economy could serve as the foundation to a mutual-gains solution for renewable energy development without requiring that individuals change their beliefs about the validity of or need to act on climate change. After values are identified and acknowledged, facts can be used to help delineate alternative courses of action towards the agreed upon solutions. Processes such as joint-fact finding can be utilized to further engender trust in the facts brought to the table.

Therefore, a central role for dispute resolution facilitators may be to help participants embrace their values while sorting out the convoluted and messy distinctions between the role of facts and values in complex, environmental issues. Ideally, this process will help circumvent squabbles over fact and fiction, bolster facts in a post-truth era, and crucially, allow parties to work towards advancing environmental problem-solving.

Hannah Satein is a PhD student in the Metropolitan Planning, Policy, and Design program at the University of Utah. Hannah is working with Dr. Danya Rumore in the Environmental Dispute Resolution program and is passionate about studying the tools of collaborative governance to help understand how to make progress on the complex environmental issues we face.