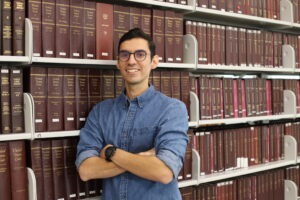 First-year law student Andres Cervantes considers his Hispanic heritage an important part of his identity. He was born in Guadalajara, Mexico and moved to the United States when he was 13 years old.

“My dad was the one that made the decision to bring the family to the U.S. from Mexico, which I’m sure wasn’t an easy decision to make,” Cervantes said. “He came from a family that didn’t have a lot of money, and he saw how hard my grandfather worked to provide for their family.”

Cervantes said that the legacy of hard work was passed down from his grandfather to his father, and now to him.

“My dad and my mom came here and worked hard to make a good living here,” he said. “That’s something that really inspires me.”

While working on getting his undergraduate degree in chemical engineering from the University of Texas at Austin, Cervantes had the idea of studying law in the back of his mind. He started a career in environmental engineering, where he worked closely with federal and state environmental regulations that further ignited his interest in law. That’s when he decided to apply to the S.J. Quinney College of Law.

Like many law students, Cervantes faced imposter syndrome during the admissions process  — and even after getting accepted.

The strong work ethic he learned from his family has helped him prepare for law school.

“Sometimes the doors may not seem to be open, but if you learn and work hard towards that goal, I think that door will eventually open and hopefully you’ll be able to get there,” he said.

In honor of National Hispanic/Latinx Heritage Month, Cervantes shared his thoughts on the importance of recognizing his Hispanic heritage.

“The best way to honor and celebrate Hispanic Heritage Month, and any heritage month for that matter, is to open up our minds to the different cultures that can make up this mixing pot in the United States,” he said. “I think that’s the best way to celebrate, to be open towards different ideas and different backgrounds. Be open to listening, be open to communicating.”

Cervantes said the mix of different perspectives is one of the greatest things about the United States.

Cervantes is looking forward to his first year in law school and may be interested in exploring a career in patent law or environmental law after he graduates.