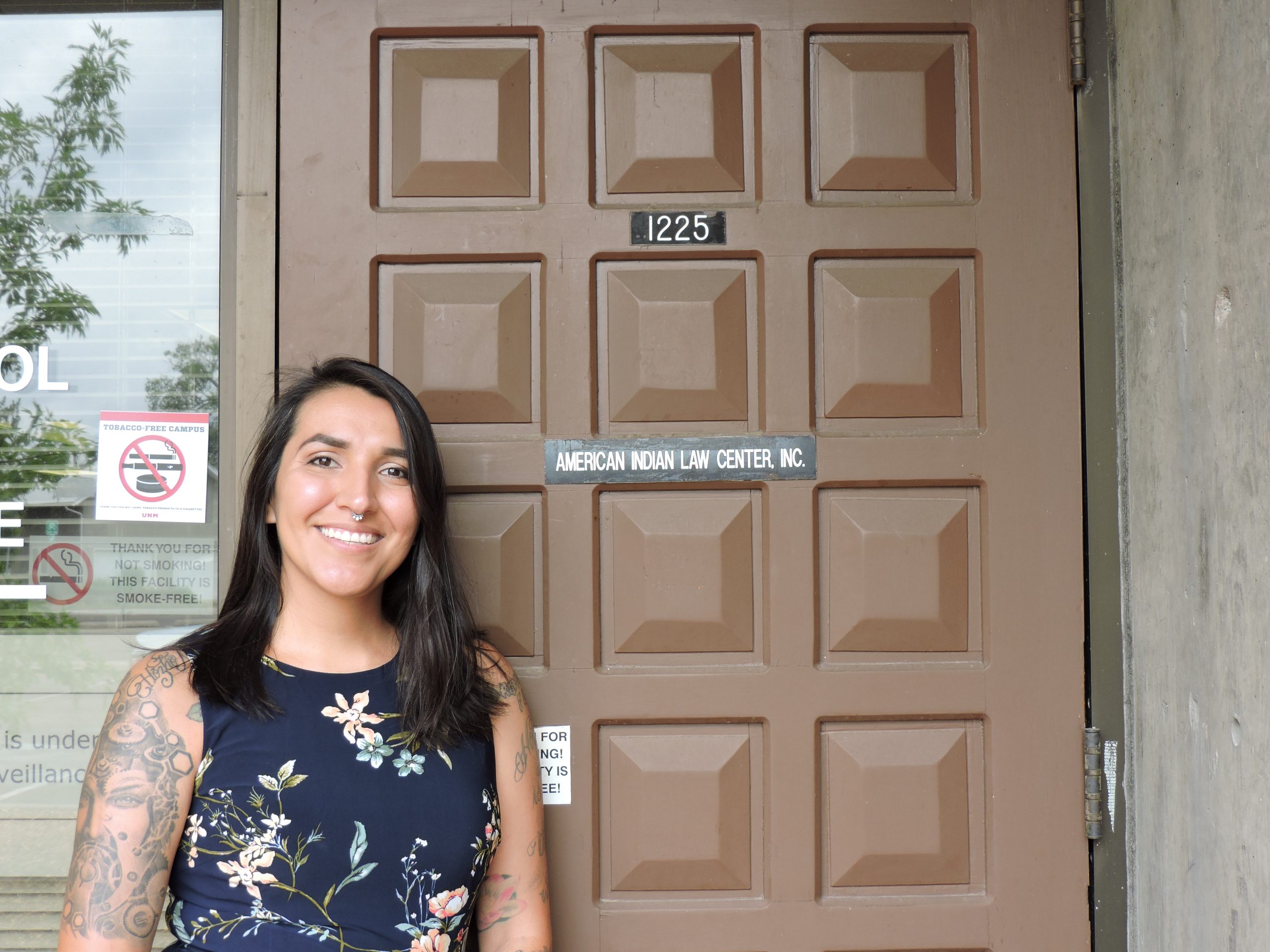 With a strong desire to fight for justice and improve life in Indian Country, Kari James chose to attend the S.J. Quinney College of Law with the eventual goal of becoming a tribal court judge.

“I grew up in a very isolated community on the Navajo Reservation called Navajo Mountain,” she said. “Seeing the social injustice and challenges of living on the reservation is why I am in law school.”

This summer, James has spent her time as a research assistant with the American Indian Law Center. Her top priority in this role has been the creation of a Tribal Court Clerkship Handbook.

This resource will help tribal judges set up judicial clerkships, according to James.

“Judicial law clerks have served for federal and state judges for years,” James said. “These clerkships are highly coveted positions throughout the country.  However, very few tribal judges have enjoyed the luxury of using a law clerk’s services. It is mostly due to a lack of financial resources. Our aim with this Handbook is to assist tribal court judges in setting up judicial clerkships. This vitally important because tribal judges are the ultimate form of tribal sovereignty.”

In order to create the handbook, James analyzes what judicial law clerks do, how funding is obtained for law clerks, the processes for hiring, onboarding and training clerks, and more. She also speaks to tribal justices without clerks to better understand the challenges they face and what information they would need to set up a clerkship. She interviews current tribal law clerks She is also reaching out to federal and private organizations to figure out ways tribal courts could fund law clerks.

“The Tribal Court Clerkship Handbook is revolutionary, there are no publications like it,” James said. “Being able to have a seat at the table and make my voice heard is such a privilege.”

Learn more about Kari James and her summer position with this Q&A.

Why did this position at the American Indian Law Center interest you?

The American Indian Law Center, Inc. (AILC) is the oldest Indian-managed and Indian-operated legal and public policy organization in the country. This organization is very well known throughout Indian Country and the Indian Law field. During spring, AILC announced they were looking for a research assistant to create a Tribal Court Clerkship Handbook. Judicial law clerks have served for federal and state judges for years. These clerkships are highly coveted positions throughout the country.  However, very few tribal judges have enjoyed the luxury of using a law clerk’s services. It is mostly due to a lack of financial resources. Our aim with this Handbook is to assist tribal court judges in setting up judicial clerkships. This is vitally important because Tribal Judges are the ultimate form of tribal sovereignty.

Why do you think you were selected for this position? What made you a good fit?

I was introduced to AILC by participating in their program, the Pre-Law Summer Institute (PLSI) for American Indians and Alaska Natives. PLSI is an intensive two-month program designed to replicate the first semester of law school. It’s kind of a law school bootcamp. After completing my first year of law school, I returned to PLSI as a Legal Writing Teaching Assistant. The relationship that I had established during the two years of working at AILC definitely made me a competitive candidate. Ultimately, it is my passion for advocating for Indigenous Law students and tribal court systems that made me a good fit. Before this position was created, I approached AILC looking for opportunities to work with tribal judges. It is important to me that Native American law students have opportunities for judicial clerkships and creating pathways to becoming tribal justices.

What type of work are you doing on a day-to-day basis?

I do a variety of day-to-day tasks. First, I work on the handbook, which is intended to be a complete manual for tribal judges. We want to make sure they have all the information they need. This covers everything from what judicial law clerks do, obtaining funding for law clerks, hiring clerks, onboarding, training, relationship development, and ending clerkships. I have spent a lot of time analyzing how state and federal courts address these areas and creating ways to implement it into tribal court systems. Additionally, I have spent time interviewing tribal court judges to have had clerks to see how their courts have done it. I talked to tribal judges that do not have clerks to gain a better understanding of what questions and issues they would like the handbook to address. I have set up interviews with tribal law clerks to get their perspectives. Finally, I have reached out to federal and private organizations to figure out ways for tribal courts to fund law clerks. AILC has a staff member that works closely with me on furthering my research and writing skills. We have weekly meetings going over writing exercises. She is really focused on implementing creative ways to approach legal writing. Second, I am tasked with assisting the AILC director and a planning group with the Federal Bar Association’s October 2021 event in New Mexico and Minnesota. I have created budget reports for the conference, written sponsorship letters and forms, and working on gathering materials and content from presenters in the Conference.  Finally, I am tasked with creating a database on job placement in Indian Country. I also create a database on current and former Native judicial clerks so they can serve as mentors to Native law students interested in applying for a judicial clerkship.

What has been the best part about working at the American Indian Law Center?

The best part about working with the American Indian Law Center is this project. The Tribal Court Clerkship Handbook is revolutionary, there are no publications like it. Being able to have a seat at the table and make my voice heard is such a privilege. I have had the opportunity to talk to tribal court judges about their work and learn about how they manage their judicial law clerks.

What has been the hardest part about working at the American Indian Law Center?

The hardest part about working AILC has been the HR component of what I am doing. A huge part of this handbook has to do with the HR side of hiring judicial law clerks. So, it has been a struggle getting information on things like what does a judicial law clerk contract look like and what should be included in it. Additionally, getting in touch with tribal judges has been a challenge. I am only working on this project for two months. Judges are very busy. I have had to develop a very diplomatic approach in getting meetings with them.

What is something you’ve learned while working at the American Indian Law Center?

Working at AILC has really opened my eyes to the functionality of tribal courts. There are so many different types of tribal courts in Indian Country. There are tribal trial courts which are usually courts of general jurisdiction with a varied trial docket. There are tribal appellate courts, most have a panel of judges and some only have single-judge systems. There are intertribal court systems which serve as a consortium of Indian tribes within a region. There are also tribal courts of limited jurisdiction which only have jurisdiction over one particular topic of law. Personally, I think these courts are so interesting. Many tribal courts have created Tribal Healing to Wellness Courts, which function like state Drug Courts. These courts incorporate tribal custom and tradition while addressing an offender’s substance abuse issues. There are also peacemaking courts which is a forum for resolving conflict through tribal values, traditions, and customs. These courts are unique and structured to individual tribes’ needs. For example, the Navajo Nation uses traditional medicine men as a peacemaking judge to improve the effectiveness and cultural authenticity of the tribal court process.

What are your future career goals? How does this opportunity prepare you for your future?

I have so many future career goals. I know that I will be working in Indian Country. I grew up in a very isolated community on the Navajo Reservation called Navajo Mountain. Seeing the social injustice and challenges of living on the reservation is why I am in law school. I have a particular interest in Criminal Law in Indian Country. I am very interested in being a tribal judicial clerk and eventually being a tribal court judge. This opportunity prepares me for my future.

What is something you’ve done this summer besides working for the American Indian Law Center?

I have really been trying to get back in touch with my Native American cultural identity this summer. I was able to visit Mt. Taylor while traveling to down here from Salt Lake City. Mt. Taylor is one of the four sacred mountains to my people. The four sacred mountains play a significant role to my people. It’s part of our creation stories, marks the boundaries of our ancestral homeland, and brings balance and wellbeing to those who inhabit it. Being able to stop and pray to the Holy People before starting this journey was something incredibly special to me.