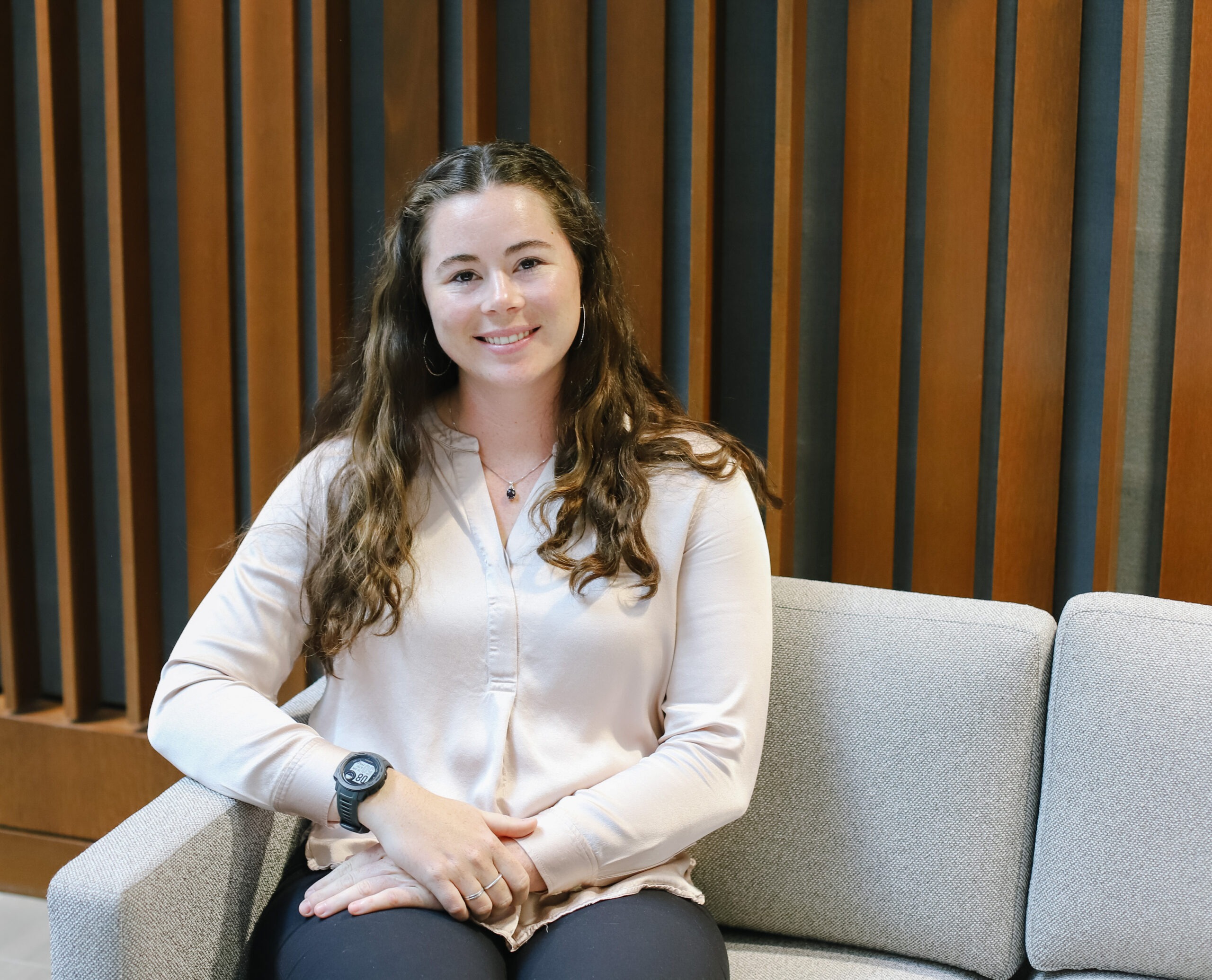 Four years into a psychology PhD program, and on the brink of matching into a fellowship that would lead to a career as a neuropsychologist, Meg Glasmann suddenly realized something: while she enjoyed the study of psychology, she didn’t love the application of it in a job setting.

So she put the brakes on her plans and began to explore other options.

When several close acquaintances suggested she explore law school as an option, she didn’t take it lightly. She spoke to dozens of local attorneys about their experiences in the legal field. She wanted to be sure about this big education and career shift.

“Every time I spoke to another lawyer, it felt more and more like home,” Glasmann said. “Like these were my flock of people.”

She applied and was promptly accepted as an early decision applicant at the S.J. Quinney College of Law at the University of Utah, and she never looked back.

As she began her law school career, Glasmann intentionally set a goal: to remain open to opportunities, whatever those opportunities might be. She felt her psychology program was too narrow and focused early on; she wanted to have the chance to explore many areas of law before settling on a career path.

That’s why she made an effort to get involved with a variety of student organizations, research projects, and internship opportunities.

“It’s been transformative for me,” she said. “I’ve had the unique opportunity to step into leadership roles in a way that I would never have imagined myself doing in any other capacity. I tried to push myself into new challenges and areas where I could grow, and because of the initial courage in leaving my program and deciding to branch out into an unfamiliar career and an unfamiliar program with a whole new group of people, I have been able to really make a community for myself here.”

Glasmann wasted no time getting involved; she became a pupil of the David K. Watkiss Sutherland II American Inn of Court in the fall of her 1L year. Subsequently, she began working with a nonprofit and wrote a whitepaper for them during the spring of her 1L year. She also worked closely with both Professor Teneille Brown and Professor Nancy McLaughlin as a research assistant. During the summer following her 1L year, she was selected as an ABA Steiger Fellow at the Utah Attorney General’s Office and worked in their antitrust and consumer protection division. More recently, she got experience doing defense work as a law clerk for the Appellate Group. She also spent time as a judicial extern for the former Utah Supreme Court Justice Constandinos Himonas.

Despite a packed schedule with these many positions, Glasmann has also cultivated relationships with her fellow students, calling many of them “lifelong friends, for sure.”

One of Meg’s biggest roles within the law school was as president of the Federal Bar Association during her 2L year. In this role, Meg set (and achieved) an ambitious goal to triple the membership of this student organization. She also worked hard to make sure students had opportunities to meet and network with local attorneys and federal magistrate judges with events like lunchtime Q&As at the law school, casual and friendly get-togethers at local hotspots, and intimate networking lunches with judges at the cafe in the federal courthouse.

Meg’s outstanding leadership with the Federal Bar Association earned her the Robert A. McNew Law Student Scholarship, which was given to only two recipients in the entire country this past year.

This summer, Meg is working as a legislative law clerk for the Utah Office of Legislative Research and General Counsel. In this position, she conducts research and writes memoranda for attorneys and policy analysts. She dives into a vast array of research areas, based on the ideas and early bill drafts of legislators, to determine any constitutional concerns the projects may raise. She also conducts multistate surveys on research topics to assist with the bill drafting process.

She is also spending time working as a law clerk for the Library of Congress in the Congressional Research Service, helping update the massive online resource that provides annotations to the Constitution. Learn more at https://constitution.congress.gov/.

These two positions, both focused on legal research and writing, brought yet another perspective to Meg’s law school experience.

“I have tried to curate my work experience so that I am not leaving law school having only done one type of work,” Meg said. “Every experience has brought me something new and something different to learn and understand within the greater field of law.”

Another benefit of Glasmann’s varied experiences: the chance to rub shoulders with her fellow students as well as local attorneys, judges, professors, and more members of the Utah legal community.

“I really cherish all of those relationships that I’ve been able to foster throughout law school,” she said.

The strong community aspect is what drew Meg to the S.J. Quinney College of Law in the first place. Before applying, she sat in on some law school classes and witnessed the way professors interacted with students, taking the time to talk to them and answering their questions. She’s been able to experience that first-hand as a student herself.

“In many ways it has been better than I could have ever dreamed,” she said.

As she approaches her final year of law school, Glasmann is looking forward to a full schedule of interesting classes, as well as being a UCEER (Utah Center for Excellence in ELSI Research) fellow, a liaison for the Women Lawyers of Utah, and continuing her involvement as an advisor and coach for a local track and field sports club.

She has no set plans for her life after law school, and much like her law school experience, she wants to explore, try new things, and see what’s a good fit.

“I’m just really looking forward to closing out my last year with as much abundance of creativity and new and varied experiences as I feel like I began it,” she said.