By Mike Lunn for EDR Blog.org.

I appreciated the thoughtful and thought-provoking blog posted by Lucy Moore on May 28, 2014, where she discussed her concerns about the levels of advocacy taken by some individuals and groups and the seeming unwillingness to engage in seeking solutions not totally in keeping with their own principles and approaches. She described advocates at both ends who espoused no compromise, take no prisoners. While acknowledging the passion and beliefs of people, she addressed the notion of finding middle ground on issues and stated, “But I would ask any advocate, enviro or otherwise, to ask themselves “What makes sense at this moment? Is it worth it to refuse to negotiate, or might I gain some valuable ground which will put me a little closer to my goal?”

My mind started rolling around those possible answers. I began wondering if part of the problem might be with the term “middle ground” and the notion of negotiating for at least some of what people want, and feel passionate and principled about. My friend and often partner, Bob Chadwick, recently published a book Finding New Ground; I have worked with him a long time, and seen so many examples of his good work that I frankly hadn’t really given much thought to the book title. But maybe “New Ground”, not middle ground, could help us work with otherwise intractable problems. New ground would result from helping people be at their creative best place based on listening with respect, learning from each other, education and common vision.  The incivility in our nation and world cries out for a better approach to solving big problems than negotiation and compromise.

I have worked in natural resources for nearly 46 years; 32 years in the Forest Service as a planner and line officer, and 14 years as a facilitator of mostly natural resource issues. I generated lots of conflicts those first 32 years; now I spend my time trying to help people do differently than I did. Some of the issues, such as the grazing on Federal lands issue that Lucy addressed, all too often seem couched in “either/or” terms. One side sees it as an abomination that should be eliminated, the other side often sees it as a “right” that came along with their permit. And some of the permits for grazing have been held by families for many decades. At a larger scale, I’ve listened a lot to the various discussions and read articles about global warming/climate change, and the role of humans. Some people consider it settled science; unfortunately, on both (all) sides. It is or it isn’t, and people get wound around the axle arguing about it.

For conflict resolution, I think a key step is framing the issue and keeping it relevant to the group. Bumper stickers used to say “Think Global, Act Local.” Congress makes the rules on grazing Federal lands. China and India largely controls airborne pollution. But whether the issues are cows or climate, improving the ecologic AND economic health of our land and streams is important in creating a more resilient future. Either/or doesn’t work anymore in most places or issues. The question is how to do improved grazing practices AND improved stream/ range health? Innovation and creativity is needed in resolving the big issues on our public lands.

The Forest Service and BLM are literally besieged by various groups; environmentalists, timber interests, ranchers, miners, etc. Budgets are low, staffing low, and expectations high. FOIA requests and appeals usurp needed field time; angry publics are ever present. In some places, agency people don’t feel safe or capable or interested in working with the publics; threats of violence are not uncommon. And it potentially will lead to an agency death spiral. One big fear of many is that National Forests and Public Lands will be sold off or turned over to the States. And sometimes the fears can turn into a self-fulfilling prophecy; leaders can’t shy away from the conflict. The need to maintain or regain the public trust is critical.

Our National Forests and Public Lands are truly treasures, as are all of our streams and rivers. We can’t turn over management to the type of advocate that Lucy described; no compromise, no middle ground. That’s why we have to help people find new ground and new (or changed) approaches to management. Bring the interests and stakeholders together, and provide a respectful safe environment to work through their issues and resolve their conflicts. Some managers say “it takes too much time to work with the public.” One way or the other, agencies will work with the public. People want more than input, they want impact on choices that affect them.   The current approach seems to be dictated by whoever yells the loudest, longest or hires the best lawyer. 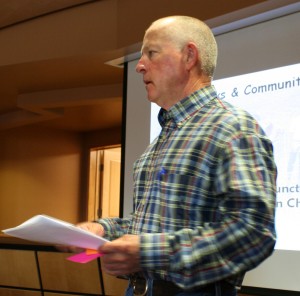 Business as usual will not fix the things that are broken with the processes of managing our lands, forests and amazing rivers. Leadership that gives our publics hope is needed. Leadership at all levels has to be willing to listen – really listen – to people and to be transparent, open and honest as they go about their business. The American public deserves that, not to be left depending on the various advocacy warriors to fight things out in Congress, courts or appeals processes.

Mike Lunn retired as Supervisor of the Rogue and Siskiyou National Forests at end of last century (12/31/1999), following a 32 year career with the Forest Service.  In this century he work as a facilitator of conflict situations, mostly with natural resource issues. He’s doing penance for all the problems he caused last century.