By Jessica Van Wagoner for BioLawToday.org

By now almost everyone has heard about The Handmaid’s Tale. The Hulu original series, based on the book by Margaret Atwood, swept the Emmys and has become a critic’s darling. The story follows Offred as a handmaid in the near-future United States, known as Gilead, in its rule by a fundamentalist regime. Under this rule, women are considered property of the state in the face of rapidly spreading infertility, and Offred is one of the few fertile women left. She lives and works in the house of a Commander, and unwillingly participates in “the ceremony,” where she must have sexual intercourse with the Commander in the presence of his wife. The Commander’s wife is believed to be infertile and Offred is to serve as a “two-legged uterus” for the couple.

Many aspects of Offred’s tale show a disparity between how men and women are treated. For example, women are not allowed to read or write, control finances, and basically lose all autonomy to the men in their lives, but most prevalent is the idea that woman are not in charge of their own fertility.

There is a long history of infertility being blamed on the woman rather than the man. Though the connection is not clearly drawn in The Handmaid’s Tale, there was a widespread theory during 19th century that too much reading for woman could lead to infertility. If a woman’s intellectual pursuits were not to blame, it was her lack of piety. “Blessed be the Fruit” and “May the Lord Open” are common greetings exchanged by handmaids and wives in the novel and Hulu series, meant to encourage fertility. In Gilead, men are never to blame as there is no such thing as male infertility. If a Commander goes through one, two, or three Handmaids with no children it is not he who is to blame but those handmaids. Perhaps they were not pious or willing enough. It is never the man, so says the law of Gilead.

Atwood’s work touches on a very important issue: the historical and current tie between woman’s health and misinformation. Some of these misconceptions are relatively harmless, like the common belief that women shouldn’t have ice-cream while pregnant, but others are not. As recently as 2016, an Idaho Senator told the Idaho House of Representatives that consent is necessary for conception and that a woman who is raped is biologically incapable of becoming pregnant. This level of gross misinformation should not be tolerated in this modern age. But it was. Following the Senator’s words, the bill on the floor was passed. When asked, the Senator said he stood by his comment.

It is easy to watch The Handmaid’s Tale in the comfort of your own living room, believing that the world of Gilead is made up, and that a government could not hold such a vice grip over women and their bodies. Gilead is an extreme; there is no question. Still, that doesn’t stop a cold chill from running down my spine as Offred was forced to relinquish control of all rights to herself and her body. Headlines about new regulations and restrictions on women’s bodies are common; one of the most recent is the current administration’s effort to expand the rights of employers to refuse women insurance coverage for birth control. We must not forget that it is women who have the rights to their bodies and we must remember to keep Atwood’s work of speculative fiction as pure speculation. 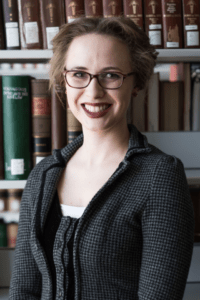 Jessica is currently a second year at the S.J. Quinney College of Law. She graduated Magna Cum Laude from Utah Valley University with a B.S. in Biotechnology. During her undergraduate degree, she performed research for InnovaBio on plant gene expression and mammalian cell culture as well as material science work for the Utah Museum of Fine Arts. Before law school, she worked for a year at Nelson Laboratories doing biocompatibility testing on medical devices. Jessica spent her first summer interning for the Legal Aid Society in their Protective Order section where she argued in court for victims of domestic violence. She plans to pursue a career in patent prosecution and litigation and is currently the president of the Student Intellectual Property Association. In her spare time, she enjoys reading fantasy and historical fiction novels, writing, and hiking with her dog. Jessica’s fellowship is funded by the law firm of Maschoff Brennan and she is engaged in a variety of research projects involving developments in intellectual property law.