“We are not stakeholders here. We are relatives to these lands, and we have something to say.”

That’s what Eric Descheenie, Co-Chair of the Bears Ears Inter-Tribal Coalition, told reporters at a press conference in Washington, D.C., on October 15th when representatives from five tribes—Ute Mountain Ute, Uintah Ouray Ute, Hopi, Zuni, and Navajo—became the first coalition of sovereign tribal nations in history to ask the U.S. government to do everything in its power to protect sacred, ancestral land as a national monument when they delievered the Bears Ears National Monument proposal to the White House.

“It’s 1.9 million acres of land in southeastern Utah, who—not what or that, but who—we relate to in a very unique and special and religious way,” explained Descheenie, also an Advisor to the President of the Navajo Nation. The Bears Ears proposal (so named for a pair of distinctive buttes said to resemble the crown of a bear rising out of the earth) encompasses a remote and culturally significant area of the Colorado Plateau fanning upstream from the confluence of the San Juan and Colorado Rivers. The region is home to more than 10,000 archaeological sites, where the spirits of ancestors still dwell, and which have been the target of intense looting in recent years. Bears Ears is part of the living history of numerous regional tribes, for whom the area figures centrally in creation stories and traditional healing practices. “It’s a cultural place,” expressed Phillip Vicente, Head Councilman for Pueblo Zuni, “where we visit and practice religious ceremonies for the purpose of attaining and resuming health for ourselves—human communities—and our natural world as an interconnected and integral world.”

The Bears Ears Nat’l Monument proposal, and indeed the Bears Ears Inter-Tribal Coalition itself, developed as a grassroots response to the Utah Public Lands Initiative—a multi-year, statewide stakeholder engagement process sponsored by Utah Representatives Rob Bishop and Jason Chaffetz with the elusive goal of reaching consensus regarding designation and management of public lands in Utah. According to a 2013 report issued by Bishop and Chaffetz, “The Public Lands Initiative has been an open, inclusive, and transparent process.”

Tribes see it differently. “We feel as if Native American concerns have been purposefully eliminated from the discussion during the Public Lands Initiative,” wrote Malcom Lehi, Ute Mountain Ute Councilman, and Willie Grayeyes, Board Chairman of the Native-led nonprofit Utah Diné Bikéyah, in a recent Salt Lake Tribune Op-Ed. At the D.C. press conference, Descheenie explained, “The Coalition exists because over the past few years our people…were not afforded the kind of inclusivity that any one of us would feel we should have, one, as a human, and two, as a citizen of the United States. Our people tried to participate in the Utah Public Lands Initiative, dating back to 2010,” but, he observed, “We haven’t been taken seriously and our voice has not been heard.”

Rather than sit idly by as sacred sites continue to be desecrated by pothunting and off-road vehicles, tribal leaders from five tribes convened this summer in a historic meeting of the minds to form a Coalition that has transcended age-old tribal rivalries in pursuit of a common cause: protecting Bears Ears for future generations of all people. Nineteen additional tribes have submitted resolutions of support for the Bears Ears proposal, which has also garnered backing from the Nat’l Congress of American Indians. “We’re standing here a part of a Coalition, with some solutions,” declared Regina Lopez-Whiteskunk, Ute Mountain Ute Councilwoman, in Washington, D.C. “We’re here as sovereign nations wielding a tool that our grandparents never even knew, but lived.”

A critical component of the Bears Ears proposal is the innovative and unprecedented collaborative management plan, in which tribes would share equal footing with federal agencies in administering the monument. The proposed eight-member administrative commission would include one individual from each of the five Coalition tribes and each of the three agencies represented within the proposed monument boundary: Forest Service, Park Service, and Bureau of Land Management. This commission would then be responsible for hiring staff and overseeing operations. “Collaborative management is the equal distribution of authority and management over public lands, between tribal governments and the federal government,” Descheenie said at the October 15th press conference. “Our proposal, we believe, introduces a new way of thinking and doing, of intergovernmental cooperation.”

As typically stoic journalists from across the country broke into applause, announcement of the Bears Ears National Monument proposal marked a historic day for tribes, for conservation, and for true collaboration. “In this process, we also offer healing,” concluded Navajo leader Willie Grayeyes. “It’s not just for us to get healed. It’s for our adversaries to be healed, too. We can all come out dancing together.” 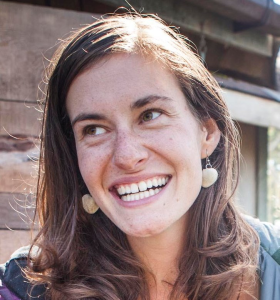 Anna Elza Brady is currently a first-year law student at the University of Oregon and communications coordinator for Utah Diné Bikéyah, a Native American nonprofit working to protect the Bears Ears cultural landscape and “bring healing to people and the Earth.” She completed her Masters in Environmental Humanities at the University of Utah this past spring.