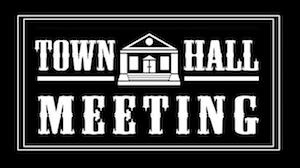 Imagine walking into a room with hundreds of people looking at you, waiting for you to speak, hanging on your every syllable.

We have plenty of these scenes: in courtrooms, congregations, theatres, and lecture halls, to name a few. Those of us who enter those settings understand the terms: we have come to receive a verdict, or a sermon, or a performance, or a lesson. We accept and expect that our participation will remain fairly passive and limited.

Not so at what we have come to call “town hall” meetings. The quotation marks remind us that originally, town hall meetings involved a single space, where residents of a single town (usually in New England) could all gather and make key decisions for the town.

Nothing about the current iteration of a town hall meeting befits its name. Large, often angry crowds arrive in often over-packed gymnasiums or other repurposed spaces. Agendas or objectives for the gathering are seldom seen. Whole sentences uttered by the convener often go unfinished, drowned out by the crowd’s reactions. Attendees come in the hopes of sharing their views, of getting questions answered, or of even influencing policy decisions, and often leave disappointed on both counts. Insults are even exchanged―both by the crowd and the presenter.

Who benefits from this? It might seem like a constitutionally-protected expression of the right to assemble, petition, and speak, and to a degree, it is. But what happens when my opinion is different than the cheering or sneering many? Chances are I will choose to hold my tongue―or the organizer will end the meeting when they have had enough of the verbal abuse. So my elected official is unable to hear my point of view―and, undoubtedly, that of many others―and may make policy decisions with incomplete, or even inaccurate, information about his constituents’ views.

Unquestionably, however, elected officials from mayors to members of Congress bear special responsibility to face their bosses (constituents) and account for their actions. But the most recent wave of town hall meetings―or perhaps pep rallies for angry constituents―suggests the model needs an overhaul.

If, indeed, the purpose of these kinds of gatherings is to allow the elected official to understand his constituents’ point of view, and to convey information, that can only happen in settings that lend themselves to conversation, in spaces rendered safe. Conversation held around a single table, in a smaller group, with the help of a facilitator who keeps the group focused on its agenda and mindful of its discussion agreements, could yield far better results than the status quo.

So could thoughtful uses of technology to improve the people’s access to those in power. A basic social media account, on Facebook or Twitter for example, can reproduce some of the same dynamics at the packed gymnasium ― unvarnished vitriol, limited information exchanged, many voices silenced. But a moderated video chat with multiple participants who can see one another, or a televised meeting that enables participants to call or send a text message (and even be part of a small group in those contexts), can change the dynamics of the conversation significantly.

Of course, in many contexts, elected officials have thousands, or even hundreds of thousands, of constituents. Perhaps the time has come for investment in a “conversation corps” ― an army of trained facilitators who make civil, civic dialogue possible for people all across the country, in settings that feel comfortable, familiar, and inviting.

Perhaps the resources of iconic Internet brands can be brought to bear in this regard ― taking the vast reach of their platform and creating small, diverse conversational cross-sections of a community, or a country. Imagine the possibilities if we could talk to someone with whom we disagree, even passionately, and find even the smallest sliver of common ground. It is difficult to find someone for a conversation like that, but it has become easier with technology.

Ultimately, as a country, we should expect more of our elected officials and how responsive they are to our concerns. But they will only change if we change the conversation. 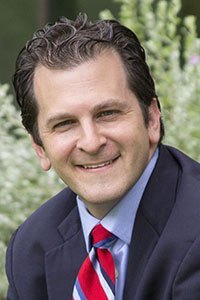 Larry Schooler is senior fellow at the Annette Strauss Institute for Civic Life at the University of Texas at Austin.