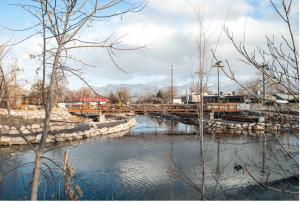 The creeks that connect us
Six years ago, a group of University of Utah students (myself included) gathered in the bowels of the School of Architecture for the Urban Ecology Capstone course. We imagined an ambitious vision, 100 Years of Daylighting—a century of taming our waterways in the Salt Lake Valley turned a century of repair. This work became the foundation for the Seven Canyons Trust.

Starting with City Creek, we traced each of Salt Lake County’s seven major creeks from the headwaters in the Wasatch Mountains to their confluence with the Jordan River. Like a paraglider soaring through sky and cloud, we explored a new canyon and creek each class. We realized that three of these creeks—Red Butte, Emigration, and Parleys—spilled out at the same location: 1300 South and 900 West in Salt Lake City.

The initial site visit revealed a degraded site—sandwiched between an auto shop and half-burnt home. When we returned to the classroom, renderings and site plans were created to demonstrate the location’s potential. Highlighted as the centerpiece of 100 Years of Daylighting, the Three Creeks Confluence was thus conceived.

The Three Creeks Confluence became the demonstration project for stream daylighting in the Salt Lake Valley. Stream daylighting is the uncovering of streams previously buried in a pipe or culvert. It aims to restore a naturally functioning waterway and riparian ecosystem—or to the most natural state possible. This depends on factors upstream, surrounding land-use, and the space available.

As students, we presented this ambitious project to then Salt Lake City Council member Kyle LaMalfa in 2014. He championed the vision, bringing it to the radar of the City’s Parks & Public Lands. Three community workshops gathered public feedback on project themes, three design concepts, and, finally, the preferred design. 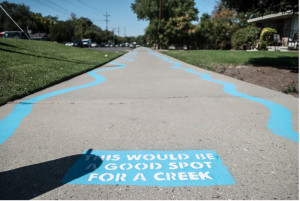 Community celebrations and creative art intervention catalyzed long-term support. A group of third-graders painted a 200-foot meandering “creek” overtop the underground waters; completed with a prompt, “This would be a good spot for a creek.” Residents painted a 500-foot creek channel to extend the effort across the street from 800 to 900 West. A large chalkboard, with the words “Goals/Metas” and “Visions/Visiones,” urged residents to provide feedback.

We secured over $3 million for the construction of the Three Creeks Confluence. With this funding, we uncovered 200 feet of the combined streams and constructed a Jordan River Trail connection, fishing bridge, and plaza space. Our efforts were awarded an Achievement Award from the Utah American Planning Association. There will be an opening celebration of this exciting restorative addition to the west-side this summer on July 9, 2021.

The Three Creeks Confluence is just the first pinprick in a century of repairing the previous 100 years of damage. All eight creek-side municipalities and Salt Lake County have come together to envision this next 100 years through the Seven Greenways Vision Plan. This is an effort to capture the collective imagination in the creation of a connected system of greenways—a linear corridor located around a stream and adjacent land—that celebrate our waterways.

Collaboration is at the core of the Seven Greenways Vision Plan. This process will set in motion a community-supported framework to highlight opportunity areas, best management practices, policies, and a toolbox of design concepts and guidelines. It requires a collective response and articulated message of benefits, including the revitalization of streams, enhanced bicycle and pedestrian infrastructure, catalyzed economic activity, increased climate resiliency, improved wildlife habitat, providing places for people to experience nature, and opportunities to learn about and enjoy water in our oasis on the desert’s edge.

Our creeks know no municipal boundaries. They flow through multiple cities, jurisdictions, and a patchwork of public and private land on their way to the downstream Jordan River. Collaboration enables local governments, landowners, and communities to envision a collective future—a system of green veins meandering through the Salt Lake Valley that connects our communities and celebrates our waterways.

Get involved by sharing your 100-year visions for the greenways and our creeks on our Community Visions board. To sign up for the project updates and future engagement opportunities, fill out the “Get Involved” form at the bottom of the website: sevengreenwaysvisionplan.org. 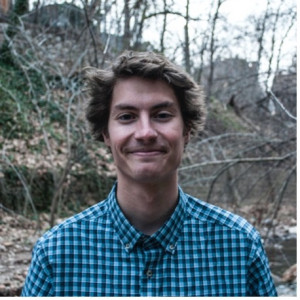 Brian Tonetti is the founder and Executive Director of the Seven Canyons Trust, a nonprofit working to uncover and restore the buried and impaired creeks of the Salt Lake Valley. He graduated from the University of Utah with degrees in Environmental and Sustainability Studies and Urban Planning. His passion for waterways developed out of a love for skiing (a frozen watersport).