(March 30, 2021) —The University of Utah S.J. Quinney College of Law is ranked among the top 50 law schools in the nation according to U.S. News & World Report’s 2022 edition of Best Graduate Schools.

The College of Law improved to #43 on the publication’s competitive list of top American Bar Association-approved law schools, gaining two spots from a #45 ranking a year ago. Among public institutions on the list, U Law climbed to an impressive 20th place. 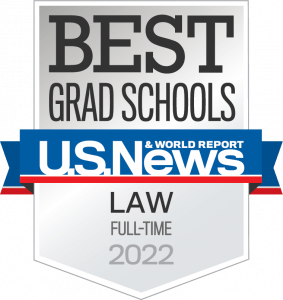 “We are an institution on the rise,” said Dean Elizabeth Kronk Warner, who set a goal to improve the College of Law’s national reputation in 2019 when she became the first Native American and female leader in the college’s then 106-year existence. “I am pleased to see our efforts to improve in several areas including the quality of faculty scholarship, job placement rates and bringing in an impressive pool of candidates to our newly admitted classes are reflected in these new national rankings.” 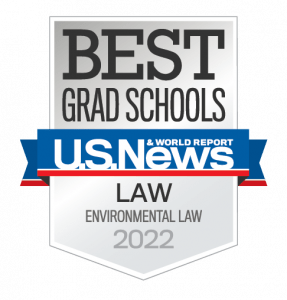 “Rankings include metrics that certainly do indicate the quality of a law school – such as bar passage and career placement data.  And rankings can be a helpful tool in evaluating the success of legal programs in relation to our peers,” said Kronk Warner.

She said initiatives designed to change the admissions process to bring in a high performing group of students with strong test scores and undergraduate GPAs helped the College of Law improve its metrics this year. Generous support from alumni and donors bolstered efforts to fundraise for scholarships, allowing the College of Law to expand its reach of prospective applicants and bring new students to the institution. And, the institution’s peer reputation score improved, as colleagues around the country gave the College of Law more positive reviews than in years past.

The College of Law’s strengths as a top-tier public law school, national leader in environmental law and growing powerhouse in the fields health and criminal law are reflected in addition to the institution’s overall ranking. Several specialty programs rose notably this year.

For the seventh year in a row, the law school retained its position as a top 10 program for environmental law, with a #10 spot on the list. Several other specialty programs have also secured notable placements, including criminal law at #30; intellectual property at #33 and health law at #32 in the nation.

Kronk Warner has instituted new measures focused on improving diversity while also supporting others in leadership to bring a heightened focus to student wellness at the college. She worked with Brigham Young University Law School Dean Gordon Young to help make Utah the first state in the nation to institute diploma privilege when the pandemic hit in the spring of 2020.

The school has continually scored well among the top public law schools in the country over the past decade, but Kronk Warner has worked to build programs to new heights.

The rankings of specialty programs reflect the steady improvements to the caliber of the College of Law’s faculty, said Associate Dean of Faculty and Research Shima Baradaran Baughman.

“Our faculty are producing top-notch research in various fields—both in quality and quantity—and people are beginning to notice. Utah will be a school to watch in the next five years, as we are not even close to finished with our rise,” said Baughman.

Support from alumni and friends of the College of Law, many who contributed to scholarships for students in difficult times, has helped advance the institution’s mission despite the recent global pandemic, said Kronk Warner.

“Our law school community has been so willing to help out in so many ways during this past year, whether it has been helping students find jobs, sharing knowledge and expertise in webinars, or providing financial donations.  Our students have greatly benefited from this support,” she said.