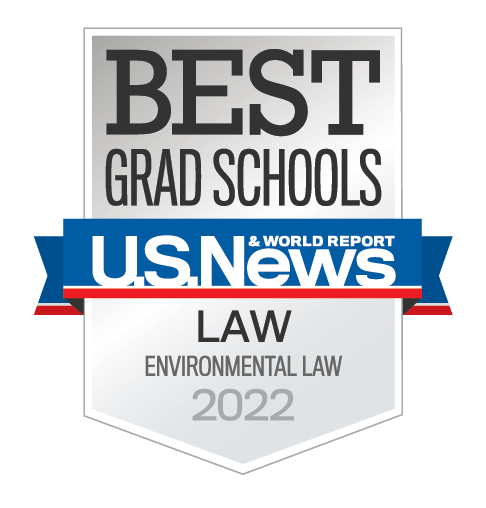 For the sixth year in a row, the S. J. Quinney College of Law retained its position as a top 10 program for environmental law, with a #9 spot on the list. “We are gratified at the Wallace Stegner Center to see the College’s environmental law program continue to be recognized with this top ten ranking, which is a real testament to the accomplishments of the Center’s faculty and students,” said Bob Keiter, the longtime the Stegner Center director.

The College of Law was ranked 45th overall among American Bar Association-approved law schools in the U.S. according to the U.S. News & World Report’s 2021 edition of Best Graduate Schools. The University of Utah S.J. Quinney College of Law’s strengths as a top-tier public law school, national leader in environmental law, and a growing powerhouse in the field of health law are reflected in newly released rankings of best law schools.

Along with the top ten rankings for environmental law, several other specialty programs at the College secured notable placements in the top 50, including business and corporate at #30; constitutional law at #44; contracts/commercial law at #39; criminal law & procedure at #33 and health law at #32 in the nation.

“Although not a perfect measurement of the strength of a law school, rankings do matter for a variety of reasons.  First, rankings matter to our alumni, students, and prospective students.  Our increased ranking increases the prestige of their degrees and is a tool by which prospective students compare law schools.  Also, rankings include metrics that certainly do indicate the quality of a law school – such as bar passage and career placement data.  Finally, rankings can be a helpful tool in evaluating the success of legal programs in relation to our peers, “ said Elizabeth Kronk Warner, dean of the S.J. Quinney College of Law.

The numbers mark an improvement and an upward trend in several areas for the College of Law, which is capping a historic year with the appointment of Kronk Warner as the first Native American and female leader in the college’s 106-year existence. Kronk Warner in her first months on the job has worked to build on the college’s already strong reputation in legal education and excellence in faculty scholarship.  She has instituted new measures focused on improving diversity while also supporting others in leadership to bring a heightened focus to student wellness at the college.

The school has continually scored high among the top public law schools in the country over the past decade.