The Perfect Environment for a Law School

Hands-on experience lets you identify which areas of law interest you most,
and can help you hit the ground running in your new legal career.

The S.J. Quinney College of Law is located in Salt Lake City, a progressive state capital and regional economic epicenter, which serves as a focal point of growth for a diverse metropolitan area. Resting in the foothills of the Wasatch Mountains, the College of Law serves as a gateway to campus. A Tier-1 Research Institution and member of the Pac-12, the University of Utah is home to leading genetics and medical research, biotechnology, business, and all the diversity in academic excellence you’d expect from a flagship university.

But it’s not just about schoolwork. Utah is home to world-class outdoor recreation and spectacular landscapes. The University of Utah’s Student Life Center is a state-of-the-art health, fitness, and lifestyle complex featuring intramural sports, exercise and weight rooms, and equipment rental programs that help students enjoy these amazing outdoor activities.

With one of the lowest student-to-full-time-faculty ratios of any law school, we provide a personalized education that allows every student to achieve their best—no one gets lost in the crowd. Here, you can craft an education based on your interests. With classes and seminars in subjects as wide-ranging as adoption law to water law, we offer something for just about anyone’s passion.

We pride ourselves in our small classes, engaged teaching, and active learning style. Our accomplished faculty includes some of the nation’s leading legal scholars, who love to see their students thrive, inquire, and succeed. Within this setting, students here know and feel our core mission: To make sure that every student has the best opportunities possible to succeed.

A Climate of Experienced Professors

The expertise of our faculty is vast, and the course topics they teach are varied. Our faculty have argued before the U.S. Supreme Court, testified before Congress, and served as high-ranking government officials. They have written leading law textbooks, served as U.S. Supreme Court clerks, and write regulation and policy.

As recognized experts, they regularly discuss law and policy on major media outlets like MSNBC, CNN, the BBC and Fox News, and author opeds in The New York Times, The Washington Post, The Wall Street Journal, The Atlantic, and others.

For a full list of faculty and their areas of expertise, visit law.utah.edu/faculty.

Meet with one of our admissions representatives

Due to the surge in positive COVID-19 cases, the Office of Admissions will suspend in-person tours, meetings, and class visits through at least February 11, 2022. We will reevaluate our COVID-19 visit protocol in February, and update the information herein.

The Office of Admission continues to be available for Zoom and telephone meetings.

Thank you for your understanding. 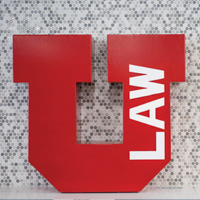 Meet with one of our Admissions representatives
(801) 581-7479
admissions@law.utah.edu

Meet with one of our Admissions representatives
Office Closure: The Office of Admissions at the S.J. Quinney College of Law will be closed for Winter Recess from Saturday, December 19 to Sunday, January 3. We will resume regular operations on Monday, January 4.
(801) 581-7479
admissions@law.utah.edu 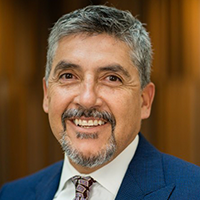 Associate Dean for Admissions and Financial Aid
Reyes Aguilar is Associate Dean for Admissions and Financial Aid and has been an administrator at the College of Law for over 25 years. Dean Aguilar earned a BA in Political Science from Texas A&M University, a JD from the S.J. Quinney College of Law and he is a member of the Utah Bar. In his time as a law school administrator, Dean Aguilar has been engaged on the national level in the areas of law school admissions and financial aid. Dean Aguilar has been active with the Law School Admission Council (LSAC) having served on numerous committees and on its Board of Trustees. He frequently presents at conferences and workshops, including those sponsored by the LSAC and the ABA. For the ABA he has served on an accreditation review team and was appointed for a term as Vice-Chair of the Government Relations & Student Financial Aid Committee. Mr. Aguilar has been named as honoree of the year for the Utah Minority Bar Association, recognized by the Utah State Bar Association with its Raymond Uno Award for contributions to the advancement of minorities in the legal profession and in 2018 The Council on Legal Education Opportunities honored Dean Aguilar with a CLEO EDGE education award as part of its 50th Anniversary celebration. He enjoys his spare time with his family, in the mountains, cooking, long boarding, skiing, biking and walking the family’s two enormous dogs.
(801) 581-6563
reyes.aguilar@law.utah.edu 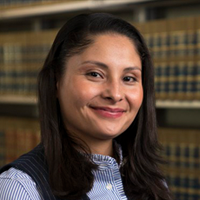 Isabel Moreno serves as the University of Utah S.J. Quinney College of Law’s (SJQ) Director for Admissions and Financial Aid. Director Moreno has been with the SJQ office of Admissions and Financial Aid since May 2016. Ms. Moreno is originally from California but lived several of her formative years in Kansas before falling in love with and settling in Utah. She is a proud alumna of SJQ’s Class of 2016. As a law student, she served on several law student organizations, volunteered in the Pro Bono Initiative, and gained practical hands-on experience by participating in the Experiential Learning Program. Director Moreno serves as an active member of the JD Admissions Committee at SJQ, the Law School Admission Council’s (LSAC) National Recruitment Work Group, and the Utah Center for Legal Inclusion’s Scholarship Committee. She is regularly invited to participate as a panelist/speaker on national events for LSAC, and in coordination with peer institutions. More importantly, she finds great satisfaction in working with prospective SJQ law students. Go Utes!
(801) 587-8312
isabel.moreno@law.utah.edu